Monica Theodorescu: New Short Grand Prix "Acceptable," but "Not For the Welfare of the Horse" 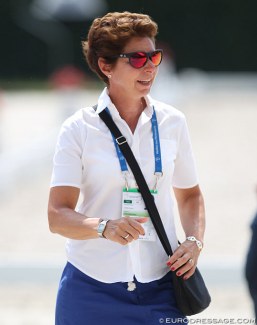 In an end-of-the-year interview with Dressursport Deutschland, German team trainer Monica Theodorescu shared her opinion on the new version of the Short Grand Prix test that was ridden at the 2019 CDI-W London Olympia Horse Show on 17 December 2019.

Monica Theodorescu is the German Grand Prix team trainer and her team has been on a high in recent years: team gold at the 2018 World Equestrian Games, team gold at the 2019 European Championships in Rotterdam and individual gold by Isabell Werth at the European and World Cup Finals.

At the 2019 CDI-W London the second version of the short Grand Prix test was ridden. Only one German - Frederic Wandres - competed at Olympia in a predominantly British field.

When asked what her impressions were about the Short Grand Prix in London, Monica replied:

"I think we always have to evaluate everything, but I don't find it correct to change things for the sake of changing things. We have to keep our values. I find that important. And these values we need to present and communicate better."

The trainer did not seemed enthused by the new test.

"This test worked better than the other Short Grand Prix tests before," said Monica. "This version is acceptable, but I don't think it meets the goals when one thinks of good riding and training with the welfare of the horse in mind. Because of the shortness of the movements, small technical failures weigh more heavily and horses don't have the team to get at ease in a movement and develop. For horses it means more stress. Into the arena and back out, next please."

"Dressage is not about completing the movements as quickly as possible. Horses need to get the opportunity to develop in a test. In walk, for instance, there needs to be time for them to have a breather. A lot of transitions have disappeared in the new short test, but transitions are important. In the canter tour there is not a single short side in which the horses can just canter. There is not one short side for the basic gaits of canter. In trot there is only one normal short side like in the classic Grand Prix."

When asked what Monica fears with the new development of a shorter Grand Prix test, she responded:

"When this test is only ridden once a year, it's not so important. But when show organizers like the test, than I fear a negative impact on the training of horses and on the quality of the sport. And because each mistake because more weighty, there is the danger that dressage sport will become a looking for mistakes. By just asking for the execution of the movements, the  gymnasticising, the suppleness and harmony between rider and horses will move to the background; the "special" horse will not be able to unfold itself in the test. We can ride the test, but to its core I don't consider the short Grand Prix test good for the welfare of the horse."