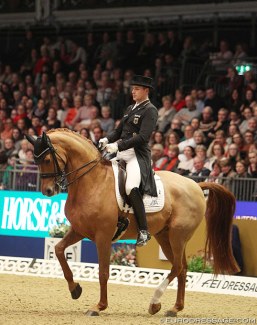 Presented by Chairman of the BHHS Katy Holder-Vale at the awards dinner on 11 January 2020, breeders Sarah and Tony Pidgley were recognized for having bred the most successful British Hanoverian in dressage of 2019.

As a youngster he sold to German dressage rider Victoria Michalke at the 2011 P.S.I. Auction. The new pair placed fourth at the 2013 FEI World Breeding Dressage Championships for Young Horses in Verden.

However, Michalke did not pursue training Duke and moved him back to Hof Kasselmann in Hagen, Germany and into the ownership of Ullrich Kasselmann.

The ride on the sympathetic chestnut was allocated to Frederic Wandres in 2016. They first started in national Prix St Georges events before working their way up to Grand Prix level. They won the Louisdor Cup qualifier for Developing Grand Prix Horses in Hagen in 2017 and ended up fifth in the 2017 Louisdor Cup Finals in Frankfurt.

2018 was their most successful year so far. The pair won the World Cup qualifiers in Zakrzow and two months later, the highly competitive qualifier at the London Olympia Horse Show. As there is a cap of two riders per nations to qualify for the World Cup Finals, Wandres just missed out on a starting place at the 2019 World Cup Finals in Gothenburg as third ranked German.

In 2019 they were submitted to the German Grand Prix B-squad and competed at the CDI's in Hagen, Hamburg, Lyon, Stuttgart and London. They are in pursuit of a starting place at the 2020 World Cup Finals in Las Vegas.