Find your own Glock's Dream Boy in the KWPN Select Sale! 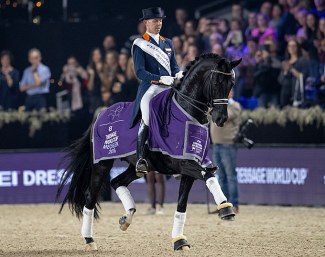 Performance, that is what it is all about these days. Performance genes through sire’s and dam’s side are what makes this collection especially interesting. The KWPN Select Sale has proven that they have selected the best stallions in this prestigious auction with the view on breeding and sports.  Silver team medal winners Glock's Dream Boy N.O.P. and MDH Avanti N.O.P., were both sold in the KWPN Select Sale as young stallions and now they have proven their talent.

Do you want to make sure you own a young talent? View the collection and take your chances in the 20th edition of the KWPN Select Sale at the biggest stallion selection in the world: the KWPN Stallion Show!

Glock's Dream Boy was sold in the KWPN Select Sale as a young stallion and won a silver team medal at the European Championships past summer. His (grand)sons Mahler and Mandela will be auctioned this year. If you are looking for a promising sport horse, take a look at Desperado son Mooiman. With three Grand Prix dressage horses in a row: Desperado, Wynton and Ferro, this Mooiman has a beautiful bloodline in which dressage genes are anchored. Desperado has shown to be cut out for the job past summer by winning the silver team medal at the European Championships in Rotterdam.

As a son of the world champion Glamourdale and out of the dam line of several Grand Prix dressage horses, this Moulijn doesn’t get his talent from a stranger. Glamourdale is well on his way to the Grand Prix level with Charlotte Fry. The dam line continues with Son de Niro and then the Ulster daughter Dolly, who is at the base of the international Grand Prix horse Just Mickey (s.Michelangelo) of the Finnish Tinne Vilhelmson. Also the Small Tour horse Wolly (s.Stravinsky xx), Dolman (s.Lord Leatherdale), who is ridden in the international Grand Prix by the Spanish Jordi Domingo, and the Grand Prix horse Meggle’s Boston (s.Johnson), are closely related to Moulijn.

The expectations of Total U.S. are high. According to Edward Gal this stallion is even better than his sire Totilas. In the KWPN Select Sale, Total U.S. son Mistral is part of the collection. In any case Total U.S. has passed on his movement to Mistral. He carries, besides the blood of Doolittle, also the proven blood of keur stallion Welt Hit II and then he goes back to the Belucci daughter Tabita, who is at the base of the Grand Prix horse Dondolo Las Marismas (s.Don Schufro) and the Small Tour horse Don Choping (s.Blue Hors Don Schufro).

452. Maximiliaan B-KWPN19L47888: World phenomenon Totilas impressed with Edward Gal for years. In the collection of the KWPN Select Sale multiple of his (grand)sons are selected. Just like this Glock's Toto Jr. son Maximiliaan B.

The collection contains more stallions that have the wanted Totilas blood. Such as Monte Cristo, who is a direct son of world phenomenon Totilas. By Glock's Toto Jr. the stallions Maximiliaan B and Morricone VDT are a part of the selected auction stallions. Maximiliaan B is a grandson of the former Grand Prix horse Reine B (s.Rubinstein I) of Lotje Schoots. Morricone VDT is by the elite mare Velvet VDT (s.Ferro), she gives exceptional dressage horses every time. Such as the Grand Prix horse Bestseller V.D.T. (s.Ungaro), the KWPN-approved Improver VDT (s.Apache) and the DWP-approved Jazz son Goldfinger V.D.T. Also the Olympic Buriel K.H. (s.Osmium) is closely related to Morricone VDT. Totilas son Glock's Trafalgar is the sire of Mel Rico. His pedigree continues with three Grand Prix dressage stallions: Wynton, Lord Sinclair and Clavecimbel. Also the influence on dam’s side is interesting, dam Florico (s.Wynton) is a half-sister to Painted Brown DVB, who is performing on Grand Prix level.

Curious yet? Check out the collection online. Besides information on the pedigree you can also find photos and videos of these stallions.

The dressage stallions will be auctioned by auctioneer Frederick de Backer on Saturday the 1st of February during the KWPN Stallion Show.