Jan Ebeling Has a New Hope in the Barn: Status Royal OLD 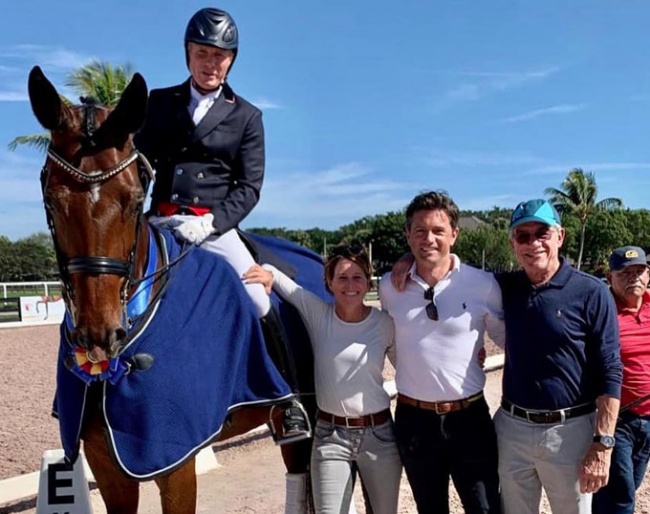 Status Royal OLD is a rising 10-year old Oldenburg by Statesman out of Facette Royal (by Rubin Royal), bred by Clemens von Merveldt.

The horse was owned by Lux Dressage and competed in 2017 and 2018 by Luxembourg's Verena Heinz. They rode at the 2017 World Young Horse Championships in Ermelo and were 26th in the consolation final for 7-year olds.

At the end of 2018 he was briefly trained and competed by Alexander Brenninkmeijer in Germany after which he moved to Hof Kasselmann, where Nicole Wego took on the ride.

"We found him at Hof Kasselmann and he has been in our program for 6 months, owned by Ann Romney," Jan's son Benjamin Ebeling told Eurodressage. "At the moment, Status is very young and our goal is to give him confidence in the developing Grand Prix arena. My dad thinks he is very talented."

In 2013 Ebeling's sponsor syndicate, which includes his wife Amy Ebeling, Beth Meyer, and Ann Romney (wife of presidential candidate Mitt Romney), acquired Rassolini in Germany but the horse did not meet the expectations and moved on as a wonderful young riders' schoolmaster for Christian Simonson.

The California based Ebeling is back in Wellington for the 2020 show season where the exposure and opportunities are best for American dressage riders.  With Olympic fever burning, Ebeling brought two Grand Prix horses: Indeed and the rising GP hope Status Royal OLD.

Jan has competed Status Royal in the first national show in Wellington on 3 - 5 January 2020. The pair competed in the Developing Grand Prix horse class and scored 71.50%. With Indeed he got 69.891% in a national grand Prix class.