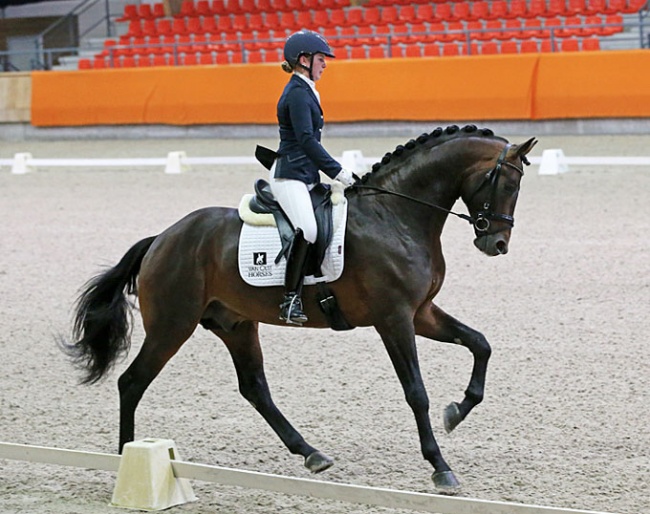 Thirteen dressage and show jumping bred stallions participated in the testing and all of them passed. They were presented under saddle twice, on Friday in a free ridden presentation and on Saturday in a dressage test, followed by a presentation ceremony with the announcement of the results.

Gert-Jan van Olst has supported the NRPS studbook, a small Dutch breeding studbook which was founded on a combination of Dutch and Anglo Arabian lines. He often sends a larger group of colts there for licensing and testing, compared to the big KWPN society.

Gregory, bred and owned by Van Olst, was the the high scorer. The stallion earned 8 for walk, 8.5 for trot, 9.5 for canter, 9 for his dressage test, character, willingness to work, stable behaviour and talent.

Evegro (by Everdale x Negro) was the second best scorer. He is bred and was presented by Van Olst, but is owned by YmpäristöPalvelut Tuominen, a Finnish company. He scored 8 for walk, 8.5 for trot, 9 for canter, 9 for character, willingness, stable behaviour and 8.5 for general impression.

Dai Ko Myo TF (by Dante Weltino x Rhodes Scholar) scored the third best results. This colt is bred by American Anne Howard (and related to Marieke van der Putten's Grand Prix horse Her Majesty TF) and owned by Martine Deen. He scored 9 for gaits and character and 8.5 for the dressage test.