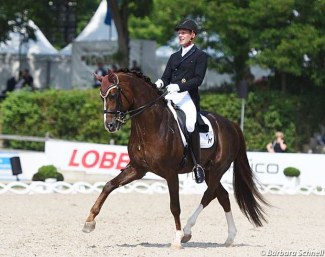 Quotenkönig is a 2009 born gelding by Quaterback out of Fleet-Street (by Fürst Piccolo x Sandro Hit x Contender). He is bred by Frank Dahlhoff and was owned by Wolfgang Suttrop.

The liver chestnut was approved at the 2011 Westfalian Stallion Licensing in Munster, where he became the third ranked premium stallion.

At the licensing he was owned by Karin Dust, but she bought back her own colt in the auction for 170,000 euro.

He did his 30-day suitability test in 2012 in Munster and scored 8.38 for dressage and 7.18 for show jumping. He achieved his full licensed status through the Bundeschampionate qualifiers.

Successes as a Youngster

In 2015 the pair represented Germany at the World Championships for Young Dressage Horses in Verden and finished 9th in the Finals after placing third in the consolation finals. At the 2015 Bundeschampionate they were fifth.

At the 2016 World Young Horse Championships in Ermelo they were 6th in the consolation finals for 7-year olds.

In 2018 Quotenkönig had moved to Isabell Werth's yard to be developed to Grand Prix level and to be potentially sold. He was gelded to be focused on sport.

Niklaas Feilzer took on the ride and first showed him at small tour level, starting in January 2018 and trying for the Nurnberger Burgpokal that season with the Developing PSG horse tests in Germany.

In 2019 Feilzer and Quotenkönig tackled the Grand Prix in the late spring. Isabell Werth competed the horse herself only once at the national show at Gut Ising in the Inter II and short Grand Prix, placing 4th and 3rd.

"With my new coach Jochen Bender I started looking for a new sports partner for next year's Under 21 tour and finally found Quotenkönig," Friesdorf told Eurodressage. "I'm looking forward to a great season with my horses and the support of my trainer."