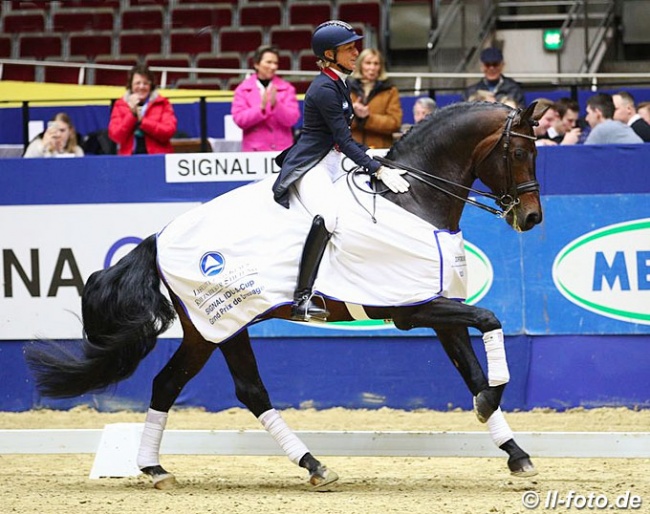 Ingrid Klimke and the 12-year old Hanoverian stallion Franziskus won the Grand Prix at the 2020 CDI Dortmund on Friday 13 March 2020.

While in the rest of Europe governments are shutting down sport events in a corona clampdown, the organizers of the Dortmund event stretched to the limit of the rule in order not to cancel their competition. On Friday afternoon, the FEI headquarters also sent out a recommendation to cancel all equestrian events, but in Dortmund the show must go on.

The seats were practically all empty and only in the VIP stands, people were sitting at their tables, watching the sport. The limited access to spectators reduced the atmosphere to that of a ghost town.

Four judges assessed the class instead of the usual five though. Maria Colliander, Evi Eisenhardt, Christoph Hess and Monique Peutz were on post.

Klimke, a Mile Ahead

Klimke and Wilhelm Holkenbrink's bay stallion Franziskus (by Fidertanz x Alabaster) stayed a mile ahead of the competition by scoring 75.217% for the victory.

"I don't think it's so bad," Klimke commented after her win. "Of course everyone is happy when they win. The spectators were ordered not to be there, but the few people that were in the arena, were happy about the sport.

The pair made its international show debut at the CDI Le Mans one month ago and are gaining mileage and exposure. Ruoste has not shown his Rotterdam revelation Rossetti since the 2019 Europeans last August and now has two irons in the fire for Tokyo individual selection.

There can't be weekend of international showing in Germany and Dorothee Schneider is not riding. One of the busiest professionals on the scene, Schneider trailered Bernd and Claudia Heicke's 12-year old Hanoverian Faustus (by Falsterbo x Forrest xx) to Dortmund and landed third place in the Grand Prix with 72.065%.

"Two very big mistakes cost us a lot of points today," Schneider communicated on her social media. "Faustus began with a very pretty and expressive trot tour, but in the zig zag he got ahead of me and there were also mistakes in the one tempi changes. Pity, because on the final line he impressed again with his piaffe and passage."