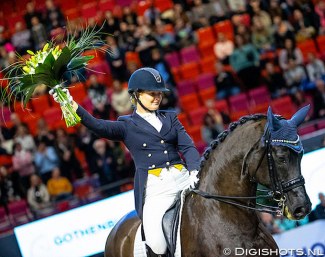 Di Lapponia is a 19-year old Hanoverian mare by Donnerhall x Argument. She is bred by Joachim Tobaben in Germany.

Paulinda bought the black beauty directly from the breeder, when the mare was two and a half years old. She was initially a broodmare before being turned into a sport horse.

Friberg only started riding Di Lapponia T in 2008 when she was a 7-year old.  They made their international show debut at Grand Prix level in 2013 when the horse was 12-year old. Their first CDI was the 2013 CDI Falsterbo, where they were fifth in the Grand Prix.

The combination competed internationally in a very consistent way for eight years, from 2013 till 2020. Only two rider accident when Paulinda fell off a horse (2014) and injured her foot (2018) kept them out of the running.

Their career highlight was competing at the 2015 World Cup Finals in Las Vegas where they were 14th in the freestyle. They also represented Sweden on Nations Cup teams in Aachen, Odense, Rotterdam, and Uggerhalne.  The pair often came close to a team spot, but never got one. In 2015 they were the first reserves for the European Championship.

At the Swedish National Championships they were 6th in 2014 and won bronze in 2017.

"It was very emotional for me when it was time to say goodbye at the Gothenburg Horse Show," said Friberg.

Already during her sport career, Di Lapponia T was a broodmare and ensured succession for Friberg, who works part-time as a hairdresser, but is also building an equestrian centre for herself, where she can teach students.

Before her sport career, Di Lapponia T produced one foal: the 2006 born Dilissima (by Topaasch).

"Di Fiorella is the rising star," Friberg told Eurodressage. "I have sold Di Fantastica and Fratello."

Paulinda will try to get Di Lapponia T back in foal this year as she enjoys her retirement from sport.