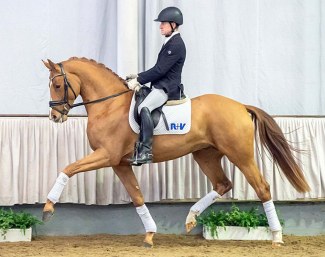 The 3-year old licensed stallion Bombino Bianco became the best seller of the 2020 Westfalian Spring elite auction in Munster, which ended on 5 April 2020.

The Westfalian spring elite auction was moved online due to the corona pandemic, following up on the initiative of the Oldenburg breeding society to go online with one of its spring auction. Oldenburg had a best seller of 250,000 euro.

Bombino Bianco (by Benicio x Ferragamo), is bred by gerhard ter Duis and was owned by Magdalena Post. He sold for 121,000 euro and moves in training with Dorothee Schneider.

The second most expensive horse was the licensed stallion Bonamico (by Benicio x San Amour), bred by Georg Johannes Ederle and owned by Matthieu Beckmann in partnership with IB Berger. This colt sold for 57,000 euro to the Czech Republic.

The 4-year old licensed Frontman (by Foundation x Sir Donnerhall) is bred by Ann Kathrin Linsenhoff and sold at the auction for 51,000 euro.

Lovelyn (by Libertad x Sir Donnerhall) stays in Germany for 45,000 euro. The bidding for the 4-year old Fidele (by Fursten-Look x Weltmeyer) stopped at 44,000 euro and the 3-year old Silverstone (by Sir Heinrich x Vitalis) sold to a German for 43,000 euro

Forty-three horses were offered for sale and 39 were listed as sold at this auction. They achieved an average price of  28,600 euro.

The Westfalian society decided to give 1% of the proceeds to Isabell Werth's initiative "Pony for Future" which helps local riding schools in need due to the corona crisis. The initiative will get 1210 euro.