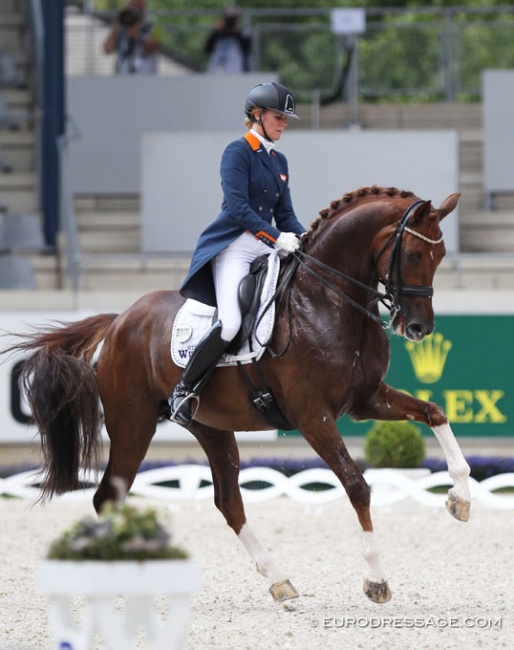 Charmeur is a 13-year old KWPN licensed stallion by Florencio out of Trendy (by Jazz). He is bred by the late Huub van Helvoirt and was owned by Nico Witte.

Successful from the Start

Charmeur has had a stellar career as a young dressage stallion. At the time he was co-owned by Barend Tamerus and Nico Witte, but the latter purchased the full ownership share in 2018.

Under Emmelie Scholtens, the chestnut won the 2011 and 2012 Pavo Cup Finals and finished 5th at the 2012 World Young Horse Championships. At the 2013 World Championships he had to be retired in the preliminary round.

From Scholtens to Vrees

Madeleine Witte-Vrees took over the ride on the sensitive stallion to FEI level and competed him in one international at small tour level, the 2015 CDI Mallorca.

Charmeur disappeared from the international show scene for three years. Witte-Vrees worked long and hard to bring the stallion to Grand Prix level.

After a few local Intermediaire II tests in Holland, the stallion finally made his national Grand Prix debut on 12-13 May 2018 at the CDN Liempde, where he won the class with 72.39%. His international Grand Prix debut was at the 2018 CDIO Rotterdam, followed by the 2018 CDIO Aachen, where they scored 67.196%. Charmeur was involved in an FEI stewarding incident which led to a Yellow card.

Witte-Vrees rode him in two more CDI's that year, Oldenburg and Stuttgart.

Retired to Stud in Canada

In 2019 the stallion injured himself and did not recover to such a fitness level to make a full come back to top level dressage sport. Just like his stable mate Wynton, Charmeur's Grand Prix career ended prematurely.

"He will only be breeding and enjoying life as a retired stallion," Proulx told Eurodressage. "I have always loved Charmeur and actually bred to him the first year I started breeding KWPN in 2014. I like his self carriage, expressive and powerful trot and canter. With all my KWPN stallions I get more breedings to Oldenburg and Hanoverian as it is a new cross for them."

Charmeur will ship to Canada in July as horse cargo to the country has been impacted by Covid-19.

As a breeding stallion, Charmeur was tremendously popular in The Netherlands, especially in his first years standing at stud. By 2018 he had sired 1200 KWPN registered offspring. He has produced four licensed sons so far.