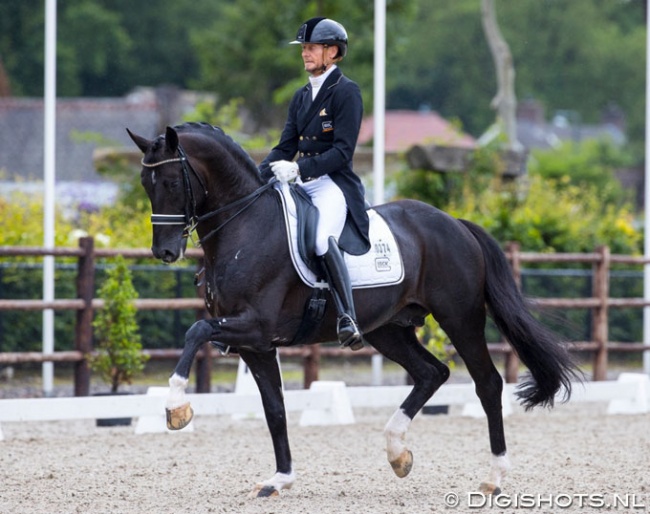 Edward Gal has made his Grand Prix debut aboard the 9-year old Hanoverian licensed stallion Toto Jr. At the 2020 CDN Schijndel on Friday 10 July 2020, the pair won the Grand Prix class with  79.43%.

The Grand Prix was judged by De Bel, Bohm and Hamoen.

Toto Jr is a 2011 born Hanoverian stallion by Totilas x Desperados x Rotspon. He is from Totilas' first crop of foals and was the second licensed Totilas offspring.
His approval at the 2013 Hanoverian Stallion Licensing in Verden was quite eventful with the crowds whistling in disagreement when the committee approved the young stallion.

He sold at auction for 100,000 euro to Austrian Gaston Glock and moved to The Netherlands.  Toto Jr. was approved for KWPN breeding and presented by Marieke van der Putten on the KWPN Stallion show circuit. Toto Jr became one of Holland's most popular and used breeding stallions and has proven his worth with excellent offspring.

Under Van der Putten Toto Jr won the 2016 Pavo Cup Finals, but with Gal he never showed. He is yet to make his international debut and,  so far, has always been kept home in preparation of his Grand prix debut while fulfilling his breeding duties. Gal only occasionally rode him in public at a select few stallions shows. In 2018, the stallion was already schooling the full Grand Prix at age 7 as displayed in the Althengst Parade in Vechta.

In recent interviews, Gal stated that he considers Toto Jr and Total U.S. his Tokyo hopefuls with his current number one Zonik as a third iron in the fire.