Look Who's Back: Chippendale 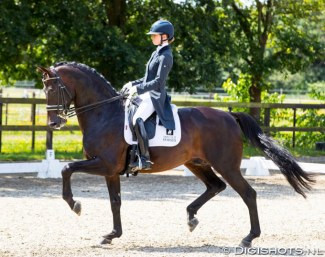 After a six year break from competition due to an ongoing lawsuit, the Dutch warmblood stallion Chippendale returned to the national competition ring in the Intermediaire II at the 2020 CDN Nispen on 10-12 July 2020.

Under Spaniard Severo Jurado Lopez, the bay stallion was the 2012 KWPN Stallion Competition winner and went on to represent the KWPN studbook at the 2012 World Championships for Young Dressage Horses in Verden, where he was 16th in the consolation finals. At that time he was listed as owned by Van Olst and Wenmoor Stables

In 2014 he made his international FEI level show debut under Anne van Olst at small tour level at the CDI Hagen, followed by one start at the CDI Roosendaal. The horse twice scored 66%. At that point he was registered with the FEI as owned by Van Olst. After Roosendaal Chippendale disappeared from the show scene.

In 2014 Bahraini Noora Al Khalifa paid 1.5 million euro for a 50% ownership of Chippendale.  The idea was for Chippendale to be Anne van Olst's 2016 Rio Olympic hopeful and in case of no qualification the horse would be sold. This sale, though, never happened.

Further financial issues between Van Olst and Al Khalifa led to Chippendale being seized by the Dutch court in April 2015. It was planned for the stallion to compete at the 2015 CDI Roosendaal but due to the legal battle the horse did not show.

Five years after the legal commotion, Chippendale has returned to the show ring under Charlotte Fry.

According to Van Olst the lawsuit between Al Khalifa and his company has been settled in court.

"All cases have been dealt with and we won completely in all cases," Van Olst told Eurodressage. "The term for an appeal and cassation has expired a long time ago. Nothing stands in our way."

As of the end of 2017 the stallion is no longer in escrow, which enabled his return  to Van Olst stables.

"We immediately started to build him back up again," Gert-Jan van Olst told Eurodressage. "Initially it was a long road, but Anne got the old Chippendale back, the one we knew, with a lot of patience and determination."

Lottie Fry began riding Chippendale at the beginning of 2020 and their first show was in Nispen.

"His 5.5 year absence did no good to Chippendale's reputation. He is a great breeding stallion and a super talented dressage horse," Van Olst stated. "It is our intention to bring Chippendale back in the attention and ensure the rehabilitation of his name. Chippendale is doing great and the end is far from near. Lottie and Anne are taking Chippendale on the road to Grand Prix  and that's their focus for now. Hopefully we'll see them soon in the big international dressage arena."