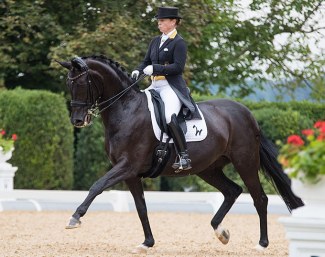 After winning both Grand Prix classes on Friday with top ride Weihegold (by Don Schufro x Sandro Hit) and Victoria Max-Theurer's rising star Quantaz (by Quaterback x Hohenstein) with two 80+ % scores, Werth continued to ride on cruise control to another double victory on Saturday and Sunday.

"There was a small miscommunication but overall Weihe was very good," said Werth. "I'm especially happy with the trot work. The fine tuning and the self confidence are always getting better."

Australian Simone Pearce has caught a wave of success since starting to work for stallion station Sprehe in Germany. Coached by Oliver Oelrich and managed by Sabine Rueben, Pearce has formed a partnership on the 13-year old Hanoverian stallion Destano (by Desperados x Brentano II), which was previously trained and competed at Grand Prix level by Swedish Michelle Hagman.

Pearce found her match in Destano and after first posting a 75% at a post-corona national show on home turf at Gestut Sprehe in Essen-Herbergen, the success in the international arena followed at the CDI-W Mariakalnok. In Achleiten the pair upped the ante, breaking the Australian Grand Prix record score with their 74.152% on Friday.

"We had all 3," Kristy Oatley posted on Instagram. "Congratulations to Simone for knocking me down times 2. Very well done, great rides! Also Mary for the freestyle in Melbourne. Records are made to be broken."

Pearce replied, "I'm pretty sure it will be taken back very quickly. I remember when I was about 12 years old and you (Kristy) were my biggest idol in the world and on my birthday you sent me a signed hat which I framed and made my parents display in the living room of our house. You have always been a massive inspiration and motivation for me and I'm so grateful for your support all the way through my career."