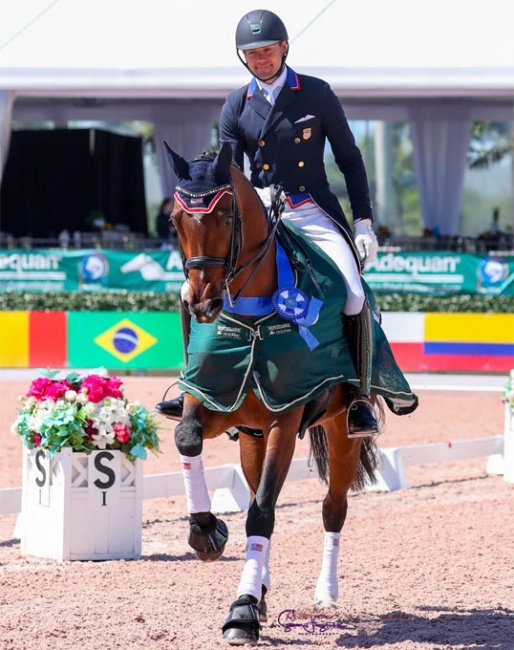 “Congratulations to Sonnenberg Farm for breeding, and Michele Bondy for helping develop, this top international mare, and thank you so much, Charlotte Bredahl, for your coaching through the season,” a grateful Endel Ots posted to his Face Book page last week shortly after learning that he and Sonnenberg’s Everdance had qualified -- in the top slot -- for the 2020 USEF Intermediare I Dressage National Championships at the US Dressage Festival of Champions, August 18-23, at Lamplight Equestrian Center in Wayne, IL.

Last year, Ots qualified at the top of the same rankings with Lucky Strike, co-owned with his father, Max Ots, and the pair went on to win the Intermediare National Championship. So the defending titlist is feeling “very comfortable and confident” going in with Dan and Gina Ruediger of Sonnenberg Farm’s 11 year-old bay Dutch Warmblood (Johnson x Zeoliet x Oldenburg) mare. Sonnenberg Farm will also have the 2019 Markel/USEF 4-year-old National Champion, Sonnenberg’s Kain, (El Capone x Carlton Hill x Flemmingh) competing this year in the 5 year old division with rider and trainer Michele Bondy. Ots has had the opportunity to coach Michele on this “incredible young gelding”. Sonnenberg’s Kain regularly scores 9’s for his trot and canter tours and Ots describes him as “a horse with a real future for the US”.

In February, at the Palm Beach Dressage Derby, Ots and Everdance clinched what would prove to be the strongest (74.976%) score in their ranking and stayed nearly five points ahead of Global Dressage Festival and Pacific Coast CDI challengers until the close of the qualifying season.

“Probably the highlight of our season was the Palm Beach Derby, where she (Everdance) won all her classes and never scored below a 74%,” Ots said noting the American-bred mare’s ability to coax 9’s and 10’s from judges. “She’s an easy horse to ride and consistent in the show ring. She’s really super in her canter and trot work, and she has lots of power. In her last test, she got a nine on her pirouettes and a German judge came up to me afterwards and said, ‘You have a new fan.’

“Of course, the coronavirus cut the season short but I’m still really excited by her development. I just love this horse and her owners, said Ots, “Sonnenberg Farm’s breeding program creates the best horses I’ve seen in the United States, and equal to anything I’ve seen in Europe. I am honored to be in this great partnership.”

2020 has been a strange year fraught with change worldwide, but one thing Ots hopes will stay the same is Sonnenberg’s Everdance’s ability to perform at her peak in the show ring, because as he has his sights set on a repeat performance of 2019 at the US Festival of Champions later this month at Lamplight.

Follow Endel Ots on social media and at www.EndelOtsDressage.com.