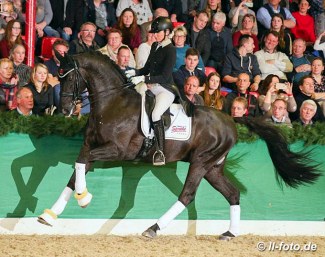 Bernay was a 2011 born Rhinelander stallion by Boston out of Lady Leatherdal (by Lord Loxley x Ferragamo x Anmarsch). He was bred by Werner Pleines and owned by Gestut Sprehe.

Bernay was first licensed at the 2013 Westfalian Stallion Licensing in Munster-Handorf. He did his 30-day stallion performance test in Munster in November 2014 and scored 8.06 for dressage and 6.73 for show jumping to finish on a total of 7.57 points.

Bernay was only very lightly competed. He made his show debut in 2015 under Hermann Gerdes to help the stallion secure its licensed status through sport. Gerdes rode the stallion in just four local shows between the autumn of 2015 and the summer of 2016.

With the arrival of Australian Simone Pearce at Gestut Sprehe, Bernay returned to the show ring. In December 2019 he did the Prix St. Georges at the CDI Exloo and in July 2020 made his Intermediaire II debut at the local show in Vreschen-Bokel, where they won and were second in two Inter 2 tests.

As a breeding stallion Bernay had just begun to make his mark, but could already boast no less than 14 licensed sons, including the 2018 Mecklenburger licensing champion Beau Noir, and 6 State Premium daughters.

After a shoeing issue, the otherwise very healthy stallion suffered a hoof problem, which was treated. Unfortunatey Bernay developed an unexpected total system failure. Despite all veterinary care, the stallion could not be saved.