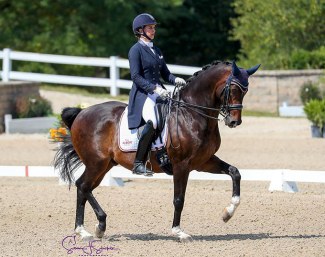 The 2020 U.S. Grand Prix Championship concluded on Sunday 23 August 2020 with the Grand Prix Freestyle Test. Jennifer Schrader-Williams (Olympia, Wash.) and Millione held on to their lead following Saturday’s Grand Prix Special Test to win the US Grand Prix Dressage National Championship with an overall score of 70.824%.

None of America's A-squad or team elite candidates made the journey from Florida or California to Illinois for the 2020 U.S. Nationals. This lefty plenty of room for other combinations to knock at the door and claim highest honour for themselves.

Schrader-Williams took over the lead in the Big Tour Championship after the winner of the Grand Prix class, Alice Tarjan on Candescent, were eliminated in the Special.

Schrader-Williams and Millione Partners, LLC’s 17-year-old Danish Warmblood gelding performed a freestyle with dramatic music from the television show Vikings. They impressed the judges with their freestyle to earn a score of 75.355%.

“I wanted to come out feeling like I rode it well. The score was amazing; that was really a cherry on top,” said Schrader-Williams of her freestyle, which she was only performing for the second time after debuting it in Florida. “I just felt like we were in unison. We were together. He was relaxed. There was enough power. He just was really with me. It was just one of those days where I could relax and smile between the movements. We just really enjoyed ourselves.

“I have been competing Mickey at this level for the last three years and it has always been my goal to really gain experience with him. He is a horse that came in as a sale horse several years ago. He has just become my partner in crime and I was really blessed to have him fall into my life,” said Schrader-Williams. “We have really just tried to take every opportunity possible that we can to learn, grow, get out here and compete and try to better ourselves in any way that we can with any opportunity that we can, so we have continued to train. We were in Florida through March. I have continued to work with Christophe Theallet monthly, either through FaceTime or, more recently, he has been having clinics at our place again. I see Debbie McDonald regularly as well. I just have a great support system that has helped us try to keep growing and learning.”

What is it like to win the national championship title?

Schrader-Williams: “I came out of that arena just tears of joy and gratitude. We have been working so hard and long. My first year of Festival was 2005 and I have wanted one of those coolers for 15 years. To have this opportunity, I am overwhelmed with gratitude for this horse. He is 17 this year and he continues to get better. He has an incredible amount of try. He comes out every day loving his job. We just can’t wait to get out there every time. I am profoundly grateful for that.

“This is my first national championship and my first reserve with the six-year-old. It is a very good day.”

Tell us about your freestyle.

“The freestyle we did today was made for another little grand prix mare that I have, but it actually fits her better. We sort of repurposed if for her. She seems to really enjoy it. I think she really likes the music. I was pretty happy with our ride. We could have had a little more pizazz in our piaffe and passage, but our canter work was really clean. I was just proud of her for digging deep and trying really hard for me today.”

What were some of the trickier parts in your freestyle?

Schrader-Williams: “There were a lot of difficult movements put close together. His strong movements are the piaffe and passage, then he has a really good ability to relax very quickly in the extended walk, so we did an extended trot to piaffe-pirouette right into an extended walk. He does that really well. I try to show the judges that he can be on point and full of power, then go right away to a very relaxed state. I thought he pulled that off today, so that was good. Just a lot of half-pass to pirouettes and tempis. If something goes wrong, there is not a lot of room to fix things and not a lot of room to repeat and have another crack at things. The only way it works out is if you nail everything and he was able to keep it pretty clean today.”

Batchelder: “Degree of difficulty-wise, we do some piaffe to pirouettes that are hard and some sort of difficult transitions, like we do extended trot into the piaffe-pirouette. We do canter-passage transitions and just a lot of difficult combinations. Actually one of the hardest things for us in that freestyle is not technically difficult, but passage directly into a half-pass because sometimes she gets confused and thinks it’s the [FEI Grand Prix Test] and supposed to be passage-canter. We just have to be careful in that moment, but she was really good today.

How long have you had the ride on your horse?

Batchelder: “I have been competing her for a year. I have known her for a really long time. She was bought for a client, Sally Seaver, who is a great client. I am so grateful to her for the ride. Sally rode her for a really long time. Just lately I have gotten the opportunity to compete her, but, no, we were not expecting to do that well. We were just coming because I have actually never competed in the [USEF Grand Prix National Championship] at Festival of Champions. I have done developing grand prix and the I-I championships, but never the grand prix division, so that is like a dream come true to be here. To get to wear the reserve champion cooler is amazing. We are very happy.”