Team Germany Back in the Lead at 2020 European Pony Championships 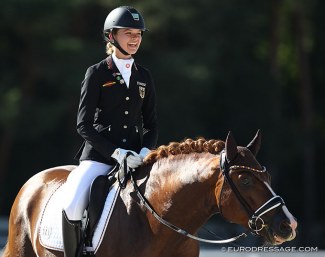 After an unusual third team place at last year's European Pony Championship, the German quartet is back on a winning course at the 2020 Pony Europeans in Pilisjaszfalu, Hungary.

The first two German team riders put the country far in the lead of the team competition, ahead of a confident Dutch and a majorly talented Belgium team.

The nations' competition started on Wednesday 26 August 2020 and is the first of three legs at the 2020 European Pony Championship, which is the concluding event of the three-week European Youth Championships held at Arie Yom Tov's Stable Unikornis in the Budapest region.

Antonia Roth, Germany's first rider to go on Wednesday, and traditionally the least experienced rider of a team, turned out to trailblaze Germany's rush on gold.

Aboard the 9-year old German bred stallion Daily Pleasure (by HB Daylight x Dressmann) Roth produced a wonderful test with highlights in the effortless canter tour. While Daily Pleasure is a German return-team-pony, last year shown by Antonia Busch-Kuffner, Roth is a first time team rider who kept her cool and was focused in the saddle.

In trot her muscled pony is less elastic on the left lead, which showed in the slightly irregular left half pass and slight unevenness in the second trot extension (as the liver chestnut gets a bit wide in the extensions). Still Roth piloted her pony smoothly through the trot work. In the shoulder in left he was a bit rushed. The collected walk needed to be more closed and in the right turn on the haunches the impulsion lacked a bit, but the left one was small and neatly ridden, and the extended walk was superb. The canter tour was a delight, with seamless simple changes, good balance in the counter canter and lovely uphill canter extensions.

The panel of judges, consisting of Paula Nysten (FIN), Orsolya Hillier (HUN), Eva Vint-Warmington (EST), Eddy de Wolff van Westerrode (NED) and Ulrike Nivelle (GER), rewarded the ride with 75.971%, the high score of the day which gave them the overnight lead. Her individual marks ranged from 74.286% to 77.857%.

Germany's second rider to go and the last of the day, Shona Benner and the 10-year old Oldenburg bred Der Kleine Sunnyboy (by Der Feine Lord x Valentino), placed second provisionally. Last year Benner was the double individual bronze medalist at the 2019 European Pony Championships, but this year German team trainer Connie Endres considered her the number three on the team and allocated her as a group one rider.

The tall and mature Benner, who is already quite versed on horses and junior level, is in her last year on ponies and trying to make it count. She started with a nice square halt, and a very nice medium and  a wonderful extended trot, but the bending on the left voltes could have been better. Also in the collected walk the pony could be a bit more closed in the frame and there was a slight loss of impulsion in the left turn on the haunches. However the extended walk was well regulated with a good 4-beat rhythm, even though the nose could come out a bit more. The rein back could have been smoothed, but the canter work was very well ridden with good balance in the counter canter, yet the simple change at X early on the marker.

The two Dutch team riders put in very solid rides and are now standing in second place in the provisional team ranking.

The tall Jill Bogers and her 8-year old NRPS bred gelding First Hummer (by FS Mr Mobility x Jarno) began with smooth trot work even though the halt at entry was not square. Bogers rode her palomino effortlessly through the traversal trot movements, even though the pony could be a bit more up in the poll and the nose or slightly ahead of the vertical. Jill rides with quite long reins and her hands are not always as quiet, but the pony foams well in the mouth and is willing to perform. There was some hesitation in the right walk pirouette, but the rein back was absolutely outstanding. The extended walk was ok with not the greatest overtrack, but in canter the pony was balanced and collected. In the end halt the pony stood wide behind.

The second Dutch score came from Jill Kempes on the 12-year old Westfalian gelding Next Black Magic (by Nabucco R x FS Pour L'Amour), who were the second to go today.

Kempes is also quite tall for her compact black pony and the contact was not even on both reins, with the bit coming more out of the mouth on the right.  The shoulder in left was a bit rushed, the half pass left not entirely regular in the rhythm, but the half pass to the right was lovely. In the collected walk the pony was too free in the frame and moving in an almost extended walk yet on a short rein. The actual extended walk was very good with a nice 4-beat rhythm. The canter is the pony's strong suit and the gait was at its best when he was given the rein on the short diagonal. The pair showed good simple changes and finished with a nice end halt. They earned 71.457% to place sixth provisionally. Her marks went from 68.143% to 72.714%.

This corona year there were only three CDI competitions where pony riders were able to show off their skill and talent. After the European corona lockdown, two CDI's were held, one in Mariakalnok (where all the Germans went to) and one in Grote-Brogel, where the Belgians met for their team selection trial. Eurodressage was there and saw that Belgium is having a peak year with outstanding quality ponies and very talented and eager riders.

Brimming with promise, Belgium travelled to Budapest full of hope and after day one, the first two riders lived up to the expectations and the judges finally rewarded their efforts and quality with the correct points, instead of conservative marks for riders from non "GER-NED-DEN" nations.

Two team new comers rode today and they performed at the best of their efforts. Ine Blommaert and the former Swedish team pony Wise Guy, a 12-year old Dutch bred gelding by Bodo x Orchard D'Avrenches which was offered for sale here on Eurodressage and then sold to Belgium, produced wonderful trot work that was cadenced throughout. There was good ground cover and crossing in the half passes and nice lengthening in the medium and extended trot. The collected walk got a bit edgy in the rhythm but improved after the first turn on the haunches, the right turn was the best one. There could be a bit more striding in the extended walk but it was relaxed. The canter work was smooth with secure simple changes and an uphill extended canter, even though the pony got slightly crooked at the end of the line. The pair produced a strong, confident test that was rewarded with 72.314% for a fourth place so far (individual marks going from 70.714% to 73.143%).

Rookie on the team, Emilie Herweyers and the 13-year old German bred gelding Don't Dream (by Don't Worry x Dressman), landed fifth place so far right behind Blommaert. The new duo showed a nice silhouette in trot, even though the pony looked a bit affected by the heat today and could have been a bit sharper on the aids. The pair flowed through the trot movements, in which there could have been a bit more spring, but they produced a very good extended walk, a wonderful uphill extended canter and clear simple changes with good walk bits. They scored a well earned 71.686% with marks going from 69.714 to 75.00%.

The Danish team arrived in Budapest as the team title defenders, having won team gold at the 2019 European Pony Championships in Strzegom. However, the lead-up to the 2020 Euros was not an easy one for its riders.

Initially Denmark announced it wouldn't send a team in this corona year, then it changed its mind and selected a team after all;  then just days before departing to Hungary, there was an issue with one of the team ponies getting a "not fit to compete" verdict for wounds in its mouth; yet a few days later the pony had recovered and was deemed "fit to compete". The Danish federation did not announce which team pony it concerned.

Josephine Gert Nielsen and her 13-year old DSP bred pony mare Dot Com (by ??) landed seventh place in the team test with 70.200%. The pony is lightfooted and elegant, but could carry herself a bit more in the trot, instead of being carried by the rider with the hands. The walk pirouettes were well ridden and the extended walk had good ground cover. In the extended trot the mare was not 100% pure in the rhythm. Nielsen rode with much concentration and overall the ride was a good one, with some small fine-tuning issues in a simple change and crooked strike off to canter.

Nathalie Thomassen and her tall 11-year old Danish bred Lukkehojs Dream of Dornik (by Melli's Dornik x Cupkehof's Winobert) sored 67.800% for 10th place, after her pony showed a lot of tension in his back in the trot work and then spooked and refused in the canter. The tension was already visible from the start as the rider seemed to not let go of one rein in the half at entry and salute, but just nodded to the judges. The medium trot was already blasted forward into an extended trot, while in the right half pass the pony lost the suspension. Dream of Dornik is a very beautiful pony with quality gaits, but today the tension was too much for him to really shine.

Eurodressage is on the scene in Budapest taking photos of all Pony Riders. If you are interested in prints and files for social media, send us a message. Please respect our copyright and do not use our photos without permission.