Germany, a League of their Own in Team Competition at 2020 European Pony Championships 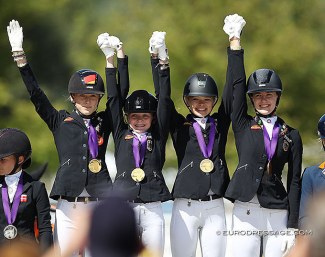 The German team was a league of their own and won the team competition at the 2020 European Pony Championships on Thursday 27 August 2020. With more than 10 percentage points ahead of Denmark, Germany won team gold, while last year's winners Denmark finished with silver and The Netherlands scored bronze.

The team competition was spread over two days with the second group of riders going on Thursday and competing in very windy conditions. The weather proved a challenge for several ponies, who became spooky and unruly with the wind blowing through their braided main. Nevertheless the team ranking was clear cut with Germany far ahead of Denmark, while Holland was on the heels of the Danes. The fourth team, Belgium, was still 6 percentage points behind bronze so the podium places were uncontested.

Germany, A League of their Own

The German team was the overnight leader with Antonia Roth and Daily Pleasure taking the lead after group one with a 75.971%. Germany's scratch score ended up being Shona Benner's 75.886% (!!!). This meant that Germany's two riders on Thursday scored even more.... much more!

Without a doubt the best pony in this year's field is Rose Oatley's 10-year old Daddy Moon (by Daddy Cool x Capri Moon). The gorgeous, large frame palomino gelding is naturally uphill built and moves with the cadence, self carriage and ring presence of a Grand Prix horse. His rider Rose Oatley - daughter of Australian Olympic dressage rider Kristy Oatley - is the youngest of the team but rides with such confidence. She sits "in" her horse, instead of on top, is quiet in the saddle with her hands and legs. It all paints a wonderful picture but with three team mates riding equally strong, it all comes down to staying faultfree.

Oatley rode the medium trot like an extended trot with very little difference between the two lengthenings. The extended trot is breath taking. The shoulder ins were a bit hasty and in the half past right there could have been more crossing, but overall the trot work was so rhythmical and balanced and flowing, even though the silhouette would have been even prettier if the pony was a bit more open in the throat latch. The collected walk was not entirely even in the frontlegs, but the extended had plenty of overtrack and a clear 4-beat rhythm. The canter work looked so secure and the last extended canter was powerful but then the pony changed lead before the left volte and the end half was fairly abrupt with a double beat behind. These niggles pushed the score down to 76.743% which placed Oatley third in the end.

Germany's last pair to go, Lucie-Anouk Baumgürtel and her 9-year old gelding Nasdaq (by Nemax x Don't Worry), became the flavour of the judges and the winner of the day. Baumgürtel, who was the 2016 and 2017 European Pony Champion on Massimiliano, opted for junior level on horses in 2019. However, the 16-year old went back to ponies this year, in her last official year on ponies, riding her fourth European Pony Championships in her career. With Nasdaq developing into a high scoring pony, a chance for more European gold was within reach.

They began with a halt at entry that wasn't square. Nasdaq is a powerful pony with a lot of engagement from behind, forward energy and bounce. He has much knee action, which is impressive in the side silhouette and for the suspension, but he did not truly lengthen the frame in the medium and extended trot, even though he easily achieved much ground cover. The walk pirouettes were nice, the extended walk was good. He did jog a few steps before the walk - trot transition. In canter he is well balanced, but his stride is not as ground covering as it seems. The left extended canter was ridden a bit conservatively and overall there could have been more lightness in the bridle contact. Still the impressive mover wowed the judges panel and they rewarded the test with a whopping 80.057%, good for the team and individual victory. The judges' individual marks ranged from 78.714% to 81.714%.

Germany's team total was 232.771 points for yet another team gold medal.

"Even our drop score was more than 75%; that is really, really good," said a proud German team trainer Connie Endres, whose team went from bronze in 2019 to gold in 2020. "Last year the problem was that our team was made up of rookies. The experience was missing. The girls are now standing side by side and are a cohesive team of which the level is incredibly high."

After a historic gold team medal at the 2019 Europeans in Strzegom, Poland, Denmark now ended up with silver on 222.171 points.

Denmark's silver campaign was spearheaded by team new comer Sophia Obel Jorgensen on the team routinier and 2019 European pony champion Adriano B (by De Angelo x Flying Dream). The 14-year old chestnut pony is showing at his fifth Europeans with his fourth rider. The German Riding pony took Karoline Rohmann and Claudia Kjaer to their first continental championships. Helgstrand rode him in 2018 and 2019 and last autumn the pony sold to Jorgensen.

Sophia and Adriano B were the Danish team high scorers as the pony's reputation carried his rider to the top of the score board. The pair rode a medium trot like an extended trot and there was loss of regularity in the left volte, but overall the trot work was solid. The collected walk needed more collection but the right walk pirouette was well ridden, while he backstepped in the left one. The extended walk was very nice with a superb clarity of rhythm. While Jorgensen has a quiet hand, the contact was not evenly elastic on both reins, with the bit coming out of the mouth on the right. The pony regularly crossed the jaws, but overall the head position was steady. In the middle of Adriano's test the fences on the longside of the arena fell over, but the pony was not shaken by this and stayed attentive to his rider. The canter had nice suspension, but in the end halt the pony stood wide in front. The pair finished second in the team test ith 76.743% with 75.000 as ow score and 78.000% as high score.

Probably one of the nicest riding of the day was shown by Danish Liva Addy Guldager Nielsen. Her 12-year old liver chestnut D'Artagnan (by Don't Worry x Colano) is not the most ground covering mover, but he was so fine on the aids and lovely in the bridle contact. The showed a good halt at entry. In trot the pony was nice and soft-footed, maybe a bit hurried on the left lead. The extended trots were nice and the half passes fluent. D'Artagnan could be a bit more up in the poll. The collected walk was excellent, with good turns on the haunches shown and the extended walk had good relaxation even though the pony did not achieve the biggest overstep. The counter canter was balanced, the simple changes good. Only in the "giving of the reins" (uberstreichen) the head got more lifted than the contact released. The pair scored 75.228% for a 7th place.

Denmark's third score was 70.200% achieved by Josephine Nielsen on Dot Com on Wednesday. The drop score was Nathalie Thomassen's 67.800% who struggled with a very tense Lykkehojs Dream of Dornik.

Bronze for The Netherlands

Holland's best scoring pony was the high quality 10-year old Westfalian Baumann's Despino (by Don't Worry x Rosedale Tiberius) presented by Lara van Nek. The pony did his first Europeans in 2018 with Thessa Gilbers and then sold to Lara van Nek straight afterwards. Van Nek has been riding in the Children, pony and junior division the past three years and this year the 15-year old opted for ponies.

Despino is a brilliant pony with a very impressive extended trot, in which he lifts the withers and clearly moves uphill. The trot work was fluent, although the pony lost the regularity in the left half pass. The walk pirouettes were well executed and the extended walk was excellent. Unfortunately the bridle contact is not so appealing. Van Nek rides her refined pony with fairly long reins, often counter bending in the corners and her hands were restless throughout the test. With much engagement and flash, the pony shines in trot. However in canter the self carriage is not as good and he fell a bit apart in the counter canter. yet Despino is so obedient and showed good simple changes. The judges struggled with their assessment of the ride. The low score was 72.143% from the German judge, the high score 78.143% from the Dutch judge. This resulted in an average of 75.314% and a 6th place.

Holland's second score was produced by Jill Bogers and her lovely 8-year old First Hummer (by FS Mr Mobility), who scored 73.600% on Wednesday and ended up 8th.

The third team score came from team new comer Sita Hopman on the 9-year old Dutch bred Brouwershaven Uthopia II, who is sired by the KWPN warmblood stallion Metall and out of a pony dam by Vita Nova's Hanassie. The bay is very tall, if not oversized, but the height of the pony suits his tall rider. Uthopia is a clear leg mover, with much flash and bounce in his trot, but the pony could use the back a bit more and stretch in the frame. The extended trot had much overtrack, but there was little bending in the voltes and corners. The half passes were lovely though. The pony became a bit unsteady in the contact in the collected walk, curling himself behind the bit, but the walk pirouettes were small and in the extended walk he had two hooves overtrack. Hopman rode the canter work like an experienced championship rider, with much focus. The quality of the walk in the simple changes could have been better, but Hopman remains focused on the test at hand and had a good kick off at her first European Championship. They scored 72.886% with 71.429% as low score and 75.429% as high score. </p> <p>Holland's scratch score was still an impressive 71.457% achieved by Jill Kempes on Next Black Magic on Wednesday.