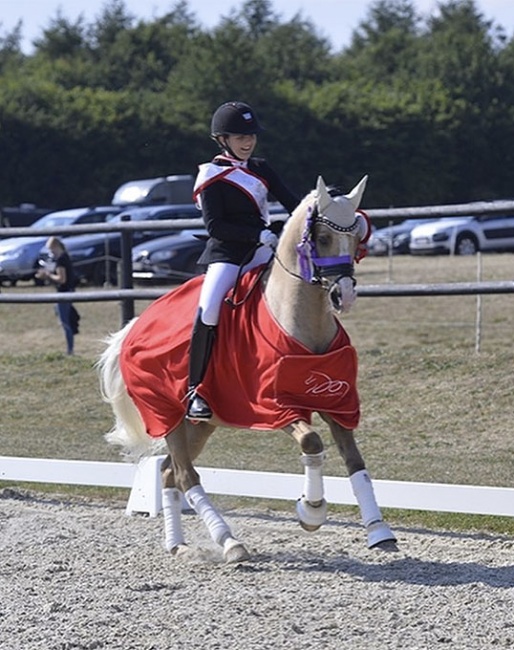 While the month of August was dedicated to the 2020 European Youth Riders Championships in Budapest, at the same time the Danish Pony Championships took place at the Hovgaard riding club on 22 - 24 August 2020. Thilde Rude Hare reigned supreme and grabbed the title.

The Danish Pony Nationals was the scene for some upheaval at the start as two Danish pony team combinations decided to participate in the event as a preparation for the European Pony Championships a few days later, but one of them was excused from the Nationals because of wounds in her pony's mouth.  Nathalie Thomassen and Lykkehojs Dream of Dornik were sent home, while Danish team reserve Trude Hare continued to compete

"Animal welfare is always an absolute top priority for DRF, and it is standard procedure for us to perform random testing at national competitions throughout the year. For the past month, we have done additional testing at almost all championships as part of a larger animal welfare campaign," Julie Servé Regtved, the press officer of the Danish equestrian federation, told Eurodressage. "It is correct that other ponies were sent home from the national championships, primarily due to wounds in the mouth."

Thilde Rude Hare and the 11-year old German bred Morgensterns Dakar (by Don't Worry x The Braes My Mobility) took a strong start winning the first round with 73.12%. They were fifth on the second day with a 71.22%, but bounced back to the top of the board in round 3, scoring 76.125%. The student of Cathrine Dufour won the overall Championship with 220.465 points.

"I am so happy and very proud that words doesn’t describe it," said Hare who finished her pony career with this title.

The silver medal went to Victoria Toft Waksvik aboard a seasoned Danish pony competitor, the 18-year old German bred SL Cuba (by Constantin x Bazar). They finished second overall with 218.742 points. The pair began their run to the podium with a third place in round 1 and 2 with 72.094% and 72.398%, followed by a second place on the last day with 74.25%.

The bronze medal went to Emilie Balling Nissen and the 17-year old Divino van Stal Romano, a Dutch bred De Vito II x Condor ox offspring. They began with a fifth place on 71.197%, moved to fourth with 72.398% and finally went back to a fifth spot with 73.792%. They scored a total of 217.022 points which placed them on the bronze medal step of the podium.