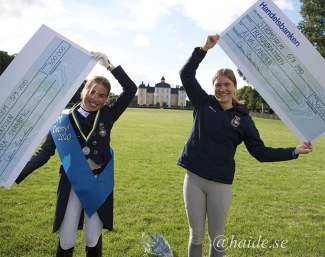 Young rider Klara Svanberg and former Under 25 rider Alva Lander are the recipients of the 2020 Ajax Stipend.

The Ajex stipend offers financial support to rising Swedish star riders for their training and competition career. They get a 300 SEK cheque to be spent on their training in the next two years.

The annual Ajax recipients are chosen by founder Ulla Håkanson in co-operation with Kyra Kyrklund, Eva Karin Oscarsson, and Jan Brink, and this year they were assisted byJens and Peder Fredricson and Henrik Ankarcrona.

This is the 16th time that the scholarship has been awarded. This year there were in fact three recipients, but the third one is show jumping rider Janelle Larsson, who received her scholarship before she moved to Belgium to train with Angelica Augustsson Zanotelli.

The dressage recipients are 26-year old Alva Lander, who went from the youth classes to U25 on Herbie Hancock Graftebjerg (by Blue Hors Hertug x Michellino). Last year she took silver at the Swedish U25 Championships.

"I will use the money for training and maybe try to go to Germany and train with Patrik Kittel," Lander stated. In Sweden she trains with Louise Nathhorst.

Klara Svanberg started out as an international pony rider in 2013 with Little Diamond's Doolitte. In 2018 she made her international debut as a Young Rider with Bon Geste at last weekend she won silver at the 2020 Swedish Young Riders Championships. She trains with and works for Johanna Due-Boje.