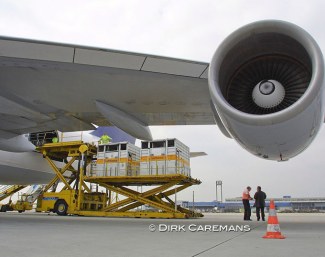 - by Lynndee Kemmet for Horsesdaily.com

Importing horses into the U.S.A. had become a nightmare for some horse owners whose horses produced "false positive" blood tests in the quarantine process.

With false positive test, horse owners face two choices – send the horse back from whence it came, or euthanize it. The difference between life and death for that horse often comes down to the owner’s financial resources.

Importing Horses into the U.S.A.

The U.S. Department of Agriculture (USDA), in its role of protecting the U.S. domestic horse herd from infectious diseases brought in from abroad, requires that arriving horses be immediately quarantined and tested for the diseases glanders, dourine, equine piroplasmosis and equine infectious anemia, of which the first three are the most serious and the main focus of testing.

Most horses being imported into the U.S. are coming from countries that have also successfully eradicated these diseases and therefore, there is little risk that these imported horses carry any of them.

Generally, the importation process goes somewhat smoothly. But every year, a dozen or more horses, even after testing negative before boarding a plane to the U.S., test positive for one of these diseases upon arriving in America. Most horse owners refer to this as a false positive test result. The USDA prefers the term non-negative and because it affects so few horses, it has not been of much concern to the USDA.

“Since 2016, the U.S. has imported close to 39,000 horses though airports. Of this total, fewer than one percent of horses have received non-negative results during import quarantine,” said Mike Stepien with the USDA’s Animal and Plant Health Inspection Service (APHIS).

But for those one percent of horses that don’t test negative, the importation effort can turn into not only a huge headache for their owners but in some cases also a heartache.

When asked how many of those dozen horses a year might actually have the disease for which the USDA tested them positive, Cliff Williamson, with the American Horse Council, said “none of them.” And for those horses that do come up with a false positive test, owners face two choices – send the horse back from whence it came or euthanize it. Williamson said the difference between life and death for that horse often comes down to the owner’s financial resources.

“The majority of these animals are ones that were purchased abroad and then brought into the U.S. But there have been at least two valuable, high-profile horses that recently got caught up in this testing situation. They were given more time to resolve this, probably because of their value. Those given a line in the sand don’t have the resources to stand up to the USDA,” Williamson said.

One of those more well-known cases was the Grand Prix dressage horse Sagacious HF, owned by Hyperion Farm, which tested positive for glanders after a return trip to the U.S. three years ago. The case raised awareness of the nightmare that horse owners can face when importing horses to the U.S. but the problem still exists as Benefiel sadly discovered. And she has not been the only case this year.

Discussion Group Meeting With the USDA To Revise the Testing Protocols

The heartache that those owners go through has been witnessed too many times by Scarlette Gotwals, a veterinarian who is the director of flight operations for Horse America, Inc. She is part of the discussion group meeting with the USDA to revise the testing protocols and has often battled alongside owners to save horses caught in the testing trap. It is a fight she has waged for years but one that seems to have become more difficult to win in recent years.

“The USDA doesn’t allow for interpretation anymore because the old guard is gone and been replaced with just bureaucrats who don’t understand the testing and won’t, and can’t, interpret,” she said. “The USDA used to have veterinarians in charge of field operations who would review an individual situation and make an interpretation. Now, no one will do anything outside of a rule book.”

The issue of false positives is also becoming more sensitive in the equestrian community because the people who are importing horses has also changed, Williamson said. Years ago, most of the people importing horses to the U.S. were doing it for business reasons and the horses were more of a commodity. They accepted the percentage risk that they might have to euthanize the horse or send it back if its test resulted in a false positive.

“Now, while the majority brought in are either competition animals that have been away for a long period of time or are being brought in to become competition animals, there are also those that ‘are my daughter’s first horse.’ We used to see just trainers and breeders bringing in horses but there are now individuals who are uncomfortable with euthanizing horses because it’s the cheapest option on the table. To them it is murdering a horse for no reason,” Williamson said.

Read the complete story on Horsesdaily.com