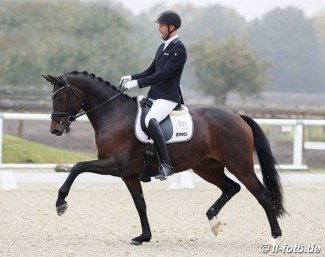 The young horse selectors at the German Equestrian Federation have organized their first of two selection trials to decide on the German delegation for the 2020 World Young Horse Championships.

The first trial took place in Warendorf on 29 - 30 September and consisted of a training day, followed by a preliminary test riding day.

A small group of 5 and 6-year olds, that had not competed at the 2020 Bundeschampionate, and a large group of 7-year olds were entered for the first trial.

The selectors picked a group of horses, which will have to return to the second selection trial on 19 - 20 October. A large group of 5 and 6-year old Bundeschampionate finalists will  also be invited to this second trial.

One horse is excused from the second trial and automatically qualified to compete at the 2020 World Young Horse Championships in Verden on 9 - 13 December : Andreas Helgstrand's Revolution. The 2018 World Champion and 2019 reserve World Champion impressed the German selectors enough to get a direct ticket to the event.

Invited to the second selection trial are: