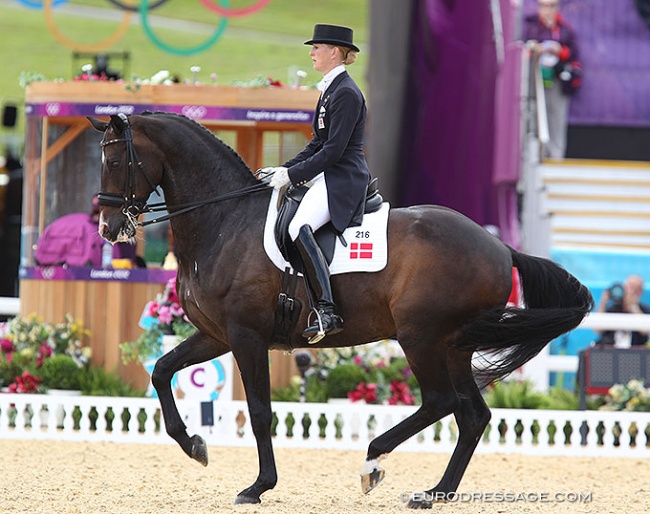 Digby was a Danish warmblood gelding by Donnerhall out of Oxdenholm Pamina (by Sandro). He was bred by Nathalie's mom, HRH Princess Benedikte of Denmark, at their home, Castle Berleburg in Germany.

As a 3-year old he was licensed and performance tested as a breeding stallion for Danish warmblood, but his career lay in dressage and he was gelded to be focused on sport.

The dark bay made his debut at Grand Prix level in 2005 and became one of Denmark's strongest performing team horses to date.

In 2012 the pair became the Danish Grand Prix Champions, Nathalie's third national title on three different horses (Fantast S in 2002, Rigoletto in 2009 and Digby in 2012). In 2013 Nathalie and Digby won silver at the Nationals.

The pair was trained by Kyra Kyrklund and Richard White.

Digby spent his retirement happily at home and had been fully healthy until suddenly, in a few days time, he foundered and could not be saved.

"It's an era that has ended, it's strange," Nathalie zu Sayn-Wittgenstein told Ridehesten.com. "It was not an easy decision but the vet told me I made the right decision for Digby. We did X-rays of him, which was just the second time in his life he got X-rayed. The vet was surprised. He had never seen such good X-rays on a 23-year old horse. He couldn't tell the horse did top sport since he was 8."

At the moment Nathalie is in Denmark for a two-day training camp with the Danish Grand Prix squad riders.

"It's very good I had to leave home," Nathalie concluded, "so that my thoughts can focus on something else."