Aringer Relocates to Löffeld Yard, Helgstrand Germany on the Move 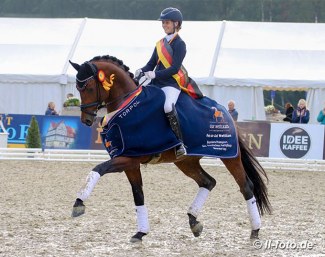 German young professional dressage rider Sina Aringer has moved her business to the equestrian centre of the Löffeld family in Lienen, Germany.

Originally from Bad Salzuflen in the south of Germany, the 29-year old Aringer did her apprenticeship at Hof Kasselmann and initially worked for Stephan Borgmann, before Aringer set up her own business, half-time, in Warendorf in November 2018.

In the spring of 2020 she was offered a half-time job working for Ulf and Eva Möller at Sudenhof in Hagen as part of the Helgstrand team.

However to be more conveniently located close to her family, she decided to relocate her independent business from Warendorf to the yard of the Löffeld family in Lienen. This stable is also the base of professionals Ann-Christin Wienkamp and Nadine Plaster.

"i moved there because it’s closer to Hagen than my stable now and take less time," Sina told Eurodressage.

Helgstrand Germany on the Move

Rumours have been running rife that Andreas Helgstrand purchased Gestut Famos in Syke near Bremen, as new German base. Two weeks ago, however, Andreas told Eurodressage that this news was just "rumours.”

The acquisition of Gestut Famos would mean that all German based Helgstrand stallions will move from Sudenhof to Famos as well as Ulf and Eva Möller and their four children, who have been living in Hagen for more than twenty years.

Aringer will no longer be part of the Helgstrand team due to this move as the drive will be too far on a daily basis.

"I really want to, but it’s not possible for me," she told Eurodressage. "My son is too small and we just bought a house here close to Hagen. My boyfriend has a super job here and he won’t move. I'm really sad about it."