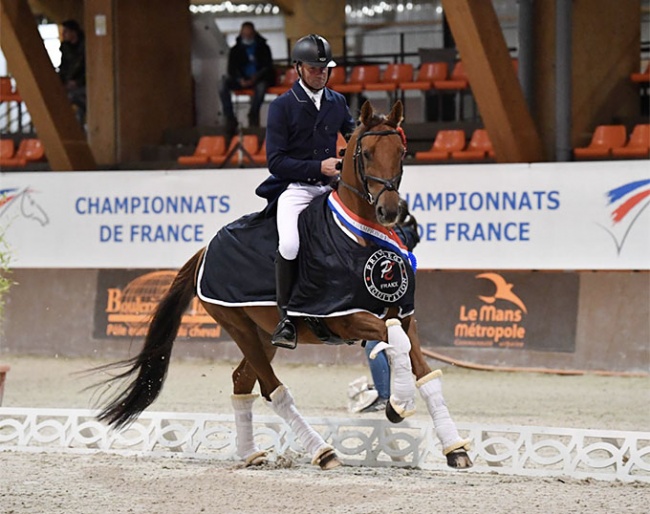 Ten pairs competed in this national championship for 7-year old dressage horses, which are hosted annually in Le Mans and this was the fifth edition of the event. Nine were ranked with Cyril Bouscaillou and Ivano not listed on the overall ranking.

The Championship is contested over two rounds, the Preliminary and Finals FEI 7-year old test, but points in the Finals test count double.

Jean-Marc Favereau and the Oldenburg gelding Deauville de Hus (by Don Juan de Hus x Don Frederico) reigned supreme and won the preliminary round with 73.024% and the finals with 75.634%. His total ended up being 74.328% for the title and champion sash.

Deauville de Hus is bred by Xavier Marie and owned by the Favereau's since the horse was a youngster. Last year the chestnut finished fourth at the 2019 French Young Horse Championships in the 6-year old division under Marine Subileau. Jean-Marc, the father in law, took over the ride at the beginning of the year as Marine took a break to have a baby.

"I can't believe it because the season has been short," a thrilled Favereau told L'Eperon. "And then the entry field wasn't bad with combinations we hadn't seen this year. You didn't know beforehand how the ranking would be. I wanted to make an impression, but to be honest didn't have much faith. This is a very nice surprise."

The reserve champion's title went to Antoine Nowakowski and the Hanoverian chestnut mare Quater Girl (by Quaterhall x Don Henrico). The pair was in a tight battle with the bronze medallists, after placing third in the preliminary round (72.471%) but then rising to a second place in the Finals (74.520%) to place second overall on a total of 73.496%.

Quater Girl is owned by the Belgian based rider, who already became the reserve champion at the 2019 Belgian Young Horse Championships in the 6-year old division.

Charlotte Chalvignac-Vesin and the Lusitano gelding Irano da Estribeira (by Rubi AR x Hostil JGB) finished in the bronze medal position on a total score of 73.252%

The pair scored 72.697% in the preliminary round, which put them second, but after posting 73.807% in the finals they were third and finished with the bronze.