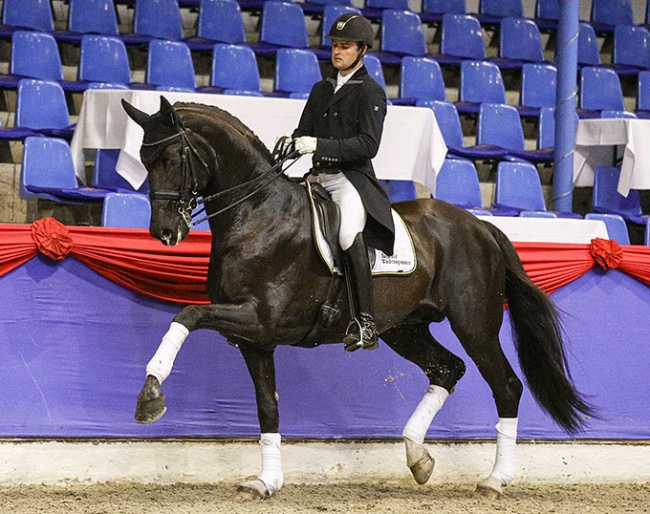 Walter Wadenspanner has acquired the 12-year old Oldenburg licensed stallion Floricello from Sara Marburg. The stallion is officially retired from sport and will only be standing at stud.

Floricello was the reserve champion of the 2010 Oldenburg Stallion Licensing in Vechta and sold to Inger Marie Hemmingsen in Sweden.

Marburg's assistant trainer Andrea Vodermair competed Floricello once in May 2014 at a local show in Kreuth, Germany. Marburg was unable to enjoy much sportive success with Floricello who soon sustained an injury that turned the horse took three years to recover from.

Floricello rehabilitated initially at Vodermair's Max Hof near Munich, but as he recovered was moved to Walter Wadenspanner's stallion station and dressage yard in 2017, where he reached fitness again.

Walter Wadenspanner and Floricello returned to the show ring at a local event in Dirnau-Burglengenfeld in July 2017, competing at M-level. The pair competed regularly through the summer and moved to small tour level by the end of 2017.

In 2018 the duo continued to show at small tour level, but only at low key regional shows until January 2019.

Floricello then had an almost one year break from competition, to make one more come back in February 2020 at S-level under Ferdinand Csaki.

Retired from Sport, Sold to Wadenspanner

Marburg has decided to retire the 12-year old Floricello entirely from sport this year and sold him as a breeding stallion to Walter Wadenspanner.

"It was Sara's wish that Floricello will only be used as a stallion in the future. He has so many very good offspring," Wadenspanner told Eurodressage. "It is not excluded that he will be presented under the saddle at stallion shows. He is very fit and doing very well."