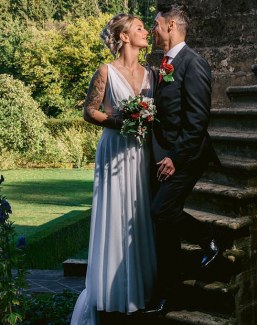 Luxembourg Grand Prix rider Mandy Zimmer (32) got married to Portuguese Paulo Levi Cartaxo on 10 October 2020. The couple has been engaged since 26 July 2020. Cartaxo is a musician by profession, while Mandy runs her own training stable out of Dressurstall Windhof in Luxembourg. The couple met at a friend's birthday party. "We looked each other for the whole night until I throw a ice cube at him and that landed on his forehead," Zimmer told Eurodressage. "Then he came to speak with me."

Spanish team trainer Rudolf Zeilinger (57) has become a dad! His partner, Swiss Grand Prix rider Josephine Rosen (34), gave birth to a baby girl in July. The baby has been named Eléonore Rosen Zeilinger. The couple has been together since 2015.

Danish Olympian Anna Kasprzak has decided to sell five of her youngsters. They have all been sold to Andreas Helgstrand to be resold. The youngsters are Falcon (by Franlin x Lord Loxley), Tiara (by Grand Galaxy Win x Romanov), Unika (by Revolution x Lord Loxley), Valencia (by For Emotion x San Amour I) and Quadron (by Quaterhit x San Amour I).. "Next year we are breaking in five youngsters and getting nine new foals, so we need the space," Anna explained. "When selling a horse, we always have to evaluate if the time is right, because keeping them for too long can be risky business too. And in this business we also need liquidity, and then you have to say goodbye to good horses."

Stephen Birchall of Newburg, Oregon, has been selected to receive a $10,000 grant from the Debbie McDonald Fund for Pacific Northwest FEI Riders.  This fund was established by Pacific Northwest dressage enthusiasts to assist riders in the region to pursue their goals of representing Team USA on the podium. Stephen will use the $10,000 grant to travel with his horses to Wellington, Florida, for training and competition in 2021.

Former Dutch team rider Danielle Heijkoop is pregnant with her first child. Heijkoop (33) and her partner Joey Lems are expecting their first child together at the beginning of March 2021. They have not revealed the gender of their baby. Lems runs the Friesian breeding and sales facility "Stoeterij Galloper" in Berkel en Rodenrijs.

The NRPS studbook has welcomed Dutch dressage rider Joyce Lenaerts to its stallion licensing committee. Lenaerts, who already served as an advisor to the committee the past two years, will join chair Gert Teunissen (vz), Jan van Beek and Dick Groenwoud on the committee.

The 9-year old Westfalian gelding Filigrano Marone (by Furstenball x Sandro Hit x Laurentianer) has been sold to Hamburg based amateur dressage rider Elisabeth Morrel (née Wolf). The dark bay gelding is bred by Alfons B¨runen and was owned by Judith Pfeifer. The gelding was first competed by Angelika Mayr in 2015 after which he disappeared from the show scene for four years. In 2019 he returned under Thomas Wagner at Developing Prix St Georges level. In June 2020 the pair rode its first Intermediaire II in Kronberg and has been showing at Develping Grand Prix level this summer. In 2014 Elisabeth Morrel already purchased Isabelle Hermann's Grand Prix ride, Number One.

The Celle state stud stallion Perpignon (by Pilot x Watzmann) has passed away at age 29. He was bred by Wilhelm Klausing and stood at stud in Landesbergen. He was one of the rare Pilot offspring that had the Hanoverian brand. He leaves behind five licensed sons, 18 offspring competing at S-level. His most famous offspring is the licensed jumper stallion Perigueux and the Hamburg Derby winner Professional Aircare.

At the national show in Ising on 17 - 18 October 2020, Nicole Casper fractured her leg. The Gestut Birkhof owner and rider was hit by a car and trailer, who was trying to park and fell awkwardly, breaking her leg. Casper will need to take a break from riding for her leg to heal.

Robert Willaert, the founder of the French Dressage Judges Club (CFJD) in 1993, passed away on 28 October 2020 near Lille, France. He was a driving force on the French judging scene, giving courses and aiding in the judging system changes. He was president of the PACA regional dressage committee. His funeral will be held on 2 November 2020 at the Crématorium d'Herlies.

Dutch Grand Prix rider Lotje Schoots and her partner of 9 years, Patrick Berends, have acquired equestrian centre Groenraven in Houten, The Netherlands. The facility was previously owned and run as a livery yard by Dutch dressage rider and horse dealer Jennifer Scharroo. Schoots was previously based in Abcoude near Amsterdam.

Just 1.5 month after getting married, Dutch Grand Prix rider Joyce Heuitink and her husband Simon van Rooijen announced that they are expecting. Joyce is 18 weeks pregnant and her baby is due at the end of March. Congratulations