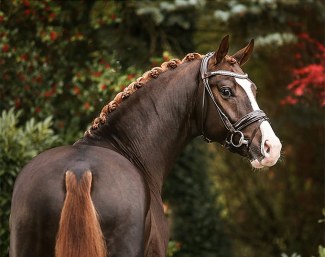 The 2.5 year old colt by Sezuan x Sir Donnerhall, who became a premium stallion and the auction price highlight, has been named Sky.

The liver chestnut is bred at the Neff Stud and was owned by Pascal Kandziora. He became the unofficial "licensing champion"  as he was the best seller at auction and thereby the most coveted stallion of the 2020 Hanoverian Stallion Licensing.

Sky was secured for 490,000 euro by the Swiss Adrian Gasser, who owns Gestut Schönwiede in Schleswig Holstein, Germany.

In Germany the majority of colts are presented as nameless animals at the licensing and only allocated a registered name after the licensing. Schönweide announced today that they baptised their premium colt "Sky".