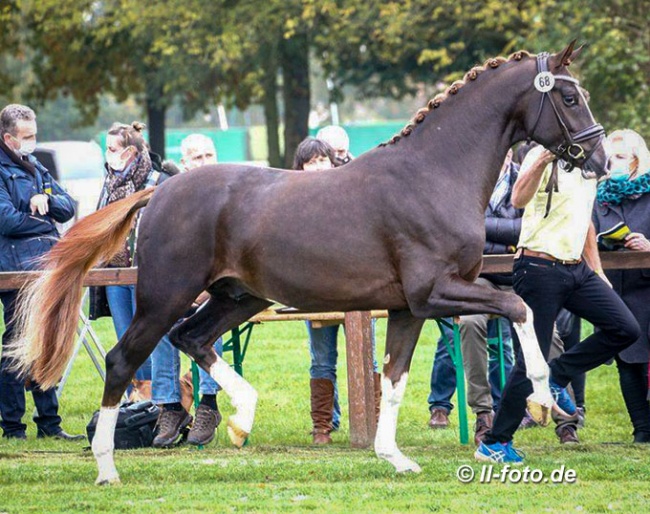 From a first class lot of 34 dressage colts, 25 were licensed and 8 proclaimed premium at the 2020 Hanoverian Stallion Licensing in Verden, Germany, on 22 - 24 October 2020. Sky (by Sezuan x Sir Donnerhall) became the most coveted premium stallion of the lot, selling for the top auction price of 490,000 euro.

The 2020 edition of the licensing was a unique one, held under special circumstances and in unique times.

The 2020 Hanoverian Stallion Licensing was a memorable one in all respects. The new presidium positions that were filled by the new elections did not make it easy to hold the licensing in difficult corona conditions. The nearer the licensing came, the higher the number of infections became and within Germany there were risk areas and individual countries declared a ban on accommodation.

These were overturned, challenged in court and decided differently at the state level. It was a dance on the tightrope, but the licensing could take place. Under strict hygiene measures and monitored by the health department.

Only five hundred tickets were issued in advance, and masks were compulsory both in the indoor arena and on the triangular track outside.  The entire licensing and also the auction could be watched live at Clipmyhorse, but there was no hybrid auction like at the Trakehner licensing. Exclusively in the indoor arena or on the phone people could be bid.

The jumping horses were strictly separated from the dressage horses and also the licensing commission was divided into the special disciplines.

However, no video can replace the viewing of the stallions on site. You look at them from a different perspective. This reporter couldn't see the stallions in the walk on the hard surface or outside, so there can't be an all-encompassing opinion, but the five hundred visitors were able to do so and the verdict was unanimous among the buyers.

A first-class lot of 34 dressage horses in high quality density presented themselves. 25 were licensed and 8 received the coveted premium.

Already on the triangle the quality became clear and  as well as the fact that the licensing commission was paying a lot of attention to correct foundation.

The first vintage of sire Secret was eagerly awaited. The freshly baked Bucha winner and also qualified for the World Championships for Young Dressage Horses in December in Verden has been controversially discussed. His riding qualities are undisputed, but many see weaknesses in his foundation that could be inherited.

The youngster by Secret out of a Stedinger dam (breeder: Matthias Löcke) quickly became one of the darlings of the public. A shapely stallion, very correct on his legs and very loose in all gaits. He sold to an American buyer 190,000 euro.

A wonderfully presented Secret son out of a Belissimo dam, bred by Dr. Karsten Harms, impressed with his agility and suppleness. Also horse investor Helgstrand saw it that way and bought the stallion for 75,000 euro. A pure bargain one could say, because he was the cheapest of the stallions Helgstrand collected.

Helgstrand was able to buy three more premium stallions at auction. The Secret x Belissimo was joined by Rom, a Revolution son, who was awarded a premium. Although he was still officially listed under another owner, the stallion had already sold to Helgstrand before the Licensing.

Officially, a sixth stallion was added. A Zackerey x Tomahawk son, which was listed on paper as the only one that Helgstrand owned at the Licensing. He was not for sale. Helgstrand bought him at the preselection and presented him under his name. This stallion did not receive a premium.

The colt Bonjour (by Bon Coeur x Fürst Nymphenburg) sold to Helgstrand as a premium stallion for 320,000 euro. The beautiful black stallion scored with his elastic uphill gaits. The premium stallion Be Sure (by Benicio x Scuderia) sold to Andreas and his co-investors for 380,000 euro. He always moved in balance and with a lot of uphill tendency.

A premium stallion by Zoom x Waterford sold to Andreas for 220,000 euro. This chestnut, handled by the likeable Kerstin Mahler, was another darling  of the crowd. Kerstin had already attracted attention the years before with her horse-friendly training on the lunge and accepted the prize for best showman. The stallion descends from a super maternal performance line and convinced not only with a loose and generous basic gaits, but also with a perfect character.

Not counting the two stallions which Andreas had already bought at the pre-selection, Helgstrand officially dug up 995,000 euro from his wallet at the 2020 Hanoverian Stalllion Licensing.

However, the most expensive stallion of the licensing will remain in the country after an exciting bidding duel. He went to Schleswig Holstein to Adrian Gasser's Gestüt Schönweide  for 490,000 euro.

Sky (by Sezuan x Sir Donnerhall), bred at the Neff Stud and owned by Pascal Kandziora, had his highlights clearly in canter and also possessed a very elastic walk.

The seventh premium stallion was Rom (by Revolution x Donnerschwee), who has a renowned mare line and convinced especially on the triangle course with enormous trot mechanics. He is bred by ZG Wencek and owned by the Liechtenstein based Susanne Durrer. This liver chestnut was not for sale.

The lot of premium stallions was completed by Democracy, a son of D'Avie out of a Desperados dam, who is the full sister of the Grand Prix stallion Destano. A very important stallion with a great conformation and great silhouette. He is bred in The Netherlands by Mirjam Drenth. He'll move to Gestut Bonhomme for 180,000 euro

Celle and Warendorf Shop Too

With 22 stallions in the auction you had to pay an average price of 126,409 euro for a licensed colt.

A son of Quando Unico x San Amour (breeder and exhibitor: Heinrich Gießelmann) will leave in direction of the State Stud in Warendorf.

The most expensive, non-premium stallion was a Farrell x Livaldon, bred by Wienke Winkelmann, who sold for 110,000 EUR at the Sosath station.

For the new "team" the licensing was a great success in terms of quality, which was also reflected in the revenues.

The auction team Hickert/de Baeker did a very good job with transparent bidding jumps. There was no million-dollar outlier to drive up the overall average. Exactly half of the stallions standing for auction were able to reach 50.000 EUR +.

Transparency and seriousness blows through the Verden Arena. Exhibitors and also preparers feel heard and especially in the difficult times of Corona,  a wind of change could be felt. Times where a stallion was named premium, although he was diagnosed with shivering syndrome are past. Such a thing must never happen again. Andresen, the Norwegian regular customer who bought the stallion Dario in 2018, relied on the former breeding director and manager to spontaneously acquire a stallion in assumed perfect health.

It cannot be customer loyalty in the long run to not take back this purchase from buyers and only after failing the stallion performance test, to want to get rid of it afterwards by an agreement between exhibitor, buyer and association. Transparency must be given from the beginning.

The Hannover Verband is on a very good and new path.