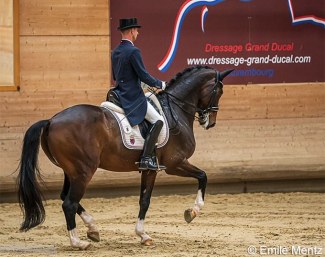 The junior rider division had five combinations participating and the category was a mixture of four Under 18 juniors and one Under 16 FEI pony rider competing at M-level.

Tim Löffler and the 16-year old Hanoverian gelding Hofgraf (by Hofrat x Weltruhm) reigned supreme and earned the gold medal with a total of 138.63 points over two rounds. He scored 70.34% in the first test and 68.29% in the second round. The silver medal went to Line Kandel on the 14-year old Westfalian mare Fee Ferra (by Flovino x Ferragamo). She scored 66.03% and 64.91% to finisjh on 130.94 points. Pony rider Alice Rouyr and her 9-year old French Camargue pony Bolero des Baux (pedigree unknown) finished with the bronze on 130.19 points. She posted 65.05% for third place in round one and 65.14% for second place in round two.

At senior small tour level professional Fie Skarsoe took highest honour aboard Emma Lou Becca's Gucci Sinclaire (by Silvano) with 71.80% and 70.45% in the two S-level tests. Veronique Henschen and Rayman Delux (by Rosandro x Ramires) got silver with 69.74% and 68.86%.

The 2020 Luxembourg Grand Prix Championships were held in a "Light" version with only three riders present.

Biggest absentee was Nicolas Wagner on Quater Back Junior, whose horse got a break after a recent, minor health issue. However also Fie Skarsoe (So Dark), Alexandra Hidien (Dancing Dynamit D), Anni Rossi (Chili Bang Bang), and Mandy Zimmer (Saladin MZ) were not there with their number one GP horses. Although Luxembourg is a tiny country, it can boast a good list of Grand Prix riders in principle, with former international GP riders Gaston Chelius, Diane Erpelding, and Isabelle Constantini (based in Spain) thrown in the mix.

German born Sascha Schulz, who hosted the Nationals at his base at Ecuries des Pres, took highest honour and the title for the fourth consecutive year, this time on a brand new horse: the 8-year old Westfalian gelding Dayman (by Daily Deal x Flovino). Schulz' previous Grand Prix team horse, Lusitano Dragao, is for sale.

Sascha's new star is the dark bay Dayman, who is bred by Hermann Gerland and was previously owned and competed up to small tour level by German Jurgen Höfler. The German company Lian United, headed by Chinese entrepreneur Qiujuan He, purchased the horse as Finnish Terhi Stegars' 2024 Olympic hopeful. He also built a brand new barn in Mettlach, Germany, to which he moved all his horses. Stegars, who is the head rider at the Contern Dressage Center and building a new business there, did not want to do the daily commute so gave up the ride. Schulz took over three months ago.