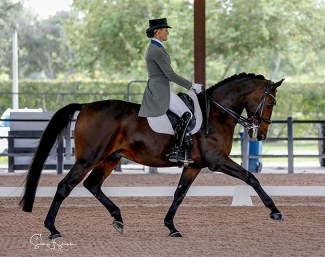 Over the weekend, Bianca Tota (USA) on her own Cadento V and Susan Dutta (USA) with her Don Design DC shone the brightest as the winners of CDI3* classes in the big tour. The classes were ridden in the covered Van Kampen arena instead of the main stadium.

“He is absolutely special; one of the most special horses I have ever sat on,” commented Tota of Cadento V. “I remember when I went to try him in Denmark and he wasn’t fit and was doing Second Level, but I sat on him and thought, ‘Oh my god, I have to have this horse!’ So here he is now!”

In the Grand Prix CDI3*, Tota and Cadento V commenced their weekend of showing on a high note thanks to a score of 68.761% from the panel of five judges that earned them the blue ribbon by more than a full percentage point in the first CDI3* class of the horse show. Returning the next day for the Freestyle, the partnership improved on their performance to add another top result to their collection as they took the win with a score of 73.190%, once again riding to first place by more than a full percentage point.

The combination has been paired together since 2014, and Tota has personally brought the horse up the ranks since then. She noted, “I’ve had him since he was eight. It’s been a really fun journey to get here. It’s been a lot of hard work, which was always fun, but it’s so nice to see it pay off. He is an amazing horse, and I’m really lucky to have him. We will see how far we can get! We will keep on keeping on.”

Sunday was Dutta’s and her 10-year old Hanoverian gelding Don Design DC’s (by Der Designer x Sir Donnerhall) day as they rose to the top of the scorecard in the Grand Prix Special CDI3*.

Dutta and the Hanoverian gelding, which she sourced at Hof Kasselmann in Germany and co-owns with her husband Tim Dutta, rode to a score of 67.872% to capture the win.

“I’m on a really high-quality horse,” remarked Dutta. “He is still young, and I think there is a lot more in there. We had a really steady test with just one small bobble. I hope that he is a team horse someday. That is my big long-term goal, but right now I am just trying to get him some experience and mileage. This is the first horse show this season, and we were a bit rusty. He is still a bit green, but it was a super start.”

Dutta has trained Don Design DC herself along with trainer Adrienne Lyle since he was a five-year-old. The training seems to be paying off, as the pair also earned a score of 67.239% and a fourth-place result in the Grand Prix CDI3* on Friday.

Like many competitors, the partnership returned to the show ring at the Global Fall Festival I for the first time since the early conclusion of the 2020 Global Dressage Festival in March.

“It feels amazing to be here. I feel very lucky that we are able to do this,” said Dutta of being back in the show ring in Wellington. “Even though we are taking all these COVID precautions, I feel super blessed that we are able to do our sport and keep going. Wearing a mask is something we should do anyway, so I think it's fine. I want to keep the horse shows going. All of us are training really hard, and we have a lot of sponsors behind us. For me, I have The Dutta Corp. and they want to see this horse go. We don’t want to sit, so we will do whatever we have to do.”

Kohmann In Charge of 3* Small Tour

Like Kohmann, Anna Marek (USA) finished the horse show with more than one new blue ribbon in tow. She scooped up two trophies in the 1* small tour in a field of 8 combinations.

The Prix St Georges CDI1* victory on Saturday went to Marek on Alise Carrico’s 10-year old Dutch warmblood mare Felissirana (by Belissimo M x Prestige VDL), who previously competed by Missy McGinn. Marek and Felissirana mare were awarded a score of 70.824% from the judges panel to put them at the head of the scorecard.

They claimed a second victory on Sunday thanks to a score of 67.265% that put them as the highest-scoring pair in the Intermediate I CDI1*.