CDI Competition Resumes in the U.S.A. in Thermal and Wellington, Several Debutants 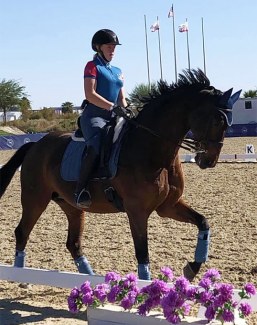 International dressage competition in the U.S.A. resumes this weekend after an eight month break due to the corona pandemic. Two CDI's take place simultaneously in the East and West Coast (in Wellington and Thermal) on13 - 15 November 2020. The starters lists includes several new debutant combinations.

The most interesting new comer to the arena is probably the 14-year old junior rider Josephine Hinnemann, daughter of U.S. dressage rider Natalie Hamilton, who married Johann Hinnemann's son Stephen. Josephine will be riding quite a famous horse in the junior tests, former international Grand Prix horse Breanna (by Brentano II). Kathleen Raine's mare is now 20 years old and serving as a schoolmaster.  Josephine's grandfather, Johann, has been spending more and more time in the U.S.A.. He has been there non stop this 2020, leaving his business in Germany to be run entirely by Stefanie Wolf, with the corona pandemic restricting travel.

At the CDI Thermal in California, the 26-year old Anna Buffini will make her CDI debut aboard the newly acquired 13-year old Hanoverian mare Davinia La Douce (by Don Frederico x A Jungle Prince) at senior Grand Prix level. The pair is not new to the arena and already got warmed up for competition in a national Spooktacular Dressage Show on 31 October, where they placed second in the Grand Prix with 71.739%

Dawn White - O' Connor will premier the Dutch warmblood gelding El Torro B (by Painted Black x Jazz), who is owned by Mary Keenan and was show by Dutch Danielle Heijkoop at the 2015 World Young Horse Championships in Verden, where they finished 13th in the 6-year old Finals. El Torro B has not stepped into an international arena since then.

Danish born Charlotte Jorst will make her CDI debut aboard the 9-year old Dutch warmblood licensed stallion Grand Galaxy Win (by Apache x Jazz). She has shown the long-legged black stallion at some national shows in California leading up to the CDI Thermal.

Steffen Peters has a new small tour ride entered, the 8-year old Oldenburg bred Boreas FRF (by Bordeaux x De Niro). The black was discovered as a foal by Petar Perkovic at the 2012 Oldenburg Foal Auction and presented him at the 2015 Oldenburg Saddle Licensing, where he was named champion and sold in the 2015 Spring Elite Auction for 140,000 euro to American Christina Vinios of Five Rings Farm.

In Wellington competition has resumed after the 2020 Global Dressage Festival was broken off prematurely by one CDI show with corona sweeping over the U.S.A.

The biggest concentration of American dressage riders is on the East Coast and they only had their first CDI in Tryon in October. For the Florida riders, this weekend's event is their first international although some national shows have already taken place at the venue the past few months. It's the first time the Global hosts a Fall CDI and several Canadian high performance riders have already down to Florida early for the 2021 show season in case borders would get locked.

German Kevin Kohmann will also make a CDI debut on Five Star, a 10-year old Dutch warmblood by Amazing Star x Jazz, owned by Russian Olga Ozerova-Hartsock. The chestnut has been competing in Florida at national level but their small tour start at the CDI will be their first. Five Star is better known in Europe as the silver medal winner at the 2016 World Young Horse Championships under Kirsten Brouwer.

Venezuelan Patricia Ferrando picked up a new horse at Helgstrand Dressage, the small tour horse Honnaisseur SJ (by Connaisseur x Jazz), which was once shown internationally by Danish Betina Jaeger at the 2019 CDIO Uggerhalne and nationally in Germany by Malin Nilsson in 2018