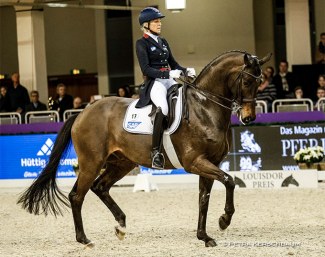 Bluetooth, the PSI Auction price highlight and Grand Prix that Ingrid Klimke has competed internationally, has been sent to Denmark.

Russian Elena Knyaginicheva acquired Bluetooth as a 3-year old at the 2013 PSI Auction for 1 million euro.

The gelding was first competed by Eva Möller as a 5-year old and by Steffen Frahm as a 6-year old. Frahm took him to the 2016 World Young Horse Championships in Ermelo and finished 11th in the Finals.

Insa Hansen then took over the ride and developed him to FEI level. She showed the horse in the small tour classes at the 2018 CDI Hagen.

In the spring of 2018 Knyaginicheva decided to send the tall bay gelding to Ingrid Klimke.

Klimke trained him to Grand Prix and focused mainly on competing him at national level. They did one CDI, the 2018 CDIO Aachen at small tour level, where they won the Intermediaire I.  They also competed in the 2018 Nurnberger Burgpokal finals for Developing Prix St Georges Horses and finished third.

In 2019 the pair rode in the Louisdor Cup finals for German Developing Grand Prix horses and finished 10th. They last competed at the K+K Cup in Munster in January 2020.

In February 2020, Bluetooth was suddenly pulled from Klimke's stable and returned to Hof Kasselmann.

Knyaginicheva explained to Eurodressage that she had received a request from the Russian Equestrian Federation to make her horse available as an Olympic team hopeful. She agreed to support this prestigious Olympic project for her country.

The ride was allocated to  Anna Pyrkina, who would be preparing him for Olympic team qualification under the supervision of Insa Hansen and Russian team trainer Ferdi Eilberg.

In March the corona pandemic hit and brought competition to a stand still. However, in Germany, shows restarted as early as May, but Pyrkina never ended up competing Bluetooth.

Bluetooth is no longer in Germany, but has been relocated to Helgstrand Dressage in Denmark.

Pyrkina has been competing other horses at national level in Russia over the summer.