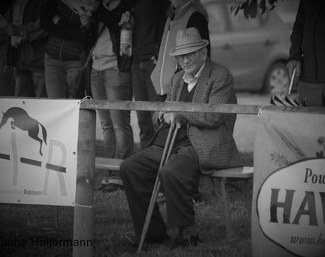 The renowned Westfalian horse breeder and stallion owner Heinrich Rohmann has passed away on 14 November 2020. He was 95 years old.

Rohmann influenced Westfalian horse breeding both in the horse and pony category and was a mentor for numerous successful dressage and show jumping riders, including Wibke Hartmann-Stommel, Hella Kunz,  Verena Hepp.

He bred multiple licensed stallions, state premium mares and Bundeschampions.  He ardently believed in the Thoroughbred sire Perseus xx and made sure he was licensed. This sire ended up producing foundation stallions Pilot and Polydor.  He discovered the legendary pony stallion Dressmann as a foal and bought it. The pony went on to become one of the most decorated sport ponies and pony sires in Germany.

Rohmann founded the namesake stallion status in Marl, Germany, of which the management was taken over by son Heinrich. They currently stand First Final (by Furst Heinrich x Argentinus), Hirtentan (by Axis x Kostolany), Qaside MD (by Quaterback x Nuget)

He was a recipient of the German Riders' Cross in bronze and got the Silver Plaque from the German Equestrian Federation, as well as the Ramzes Prize.