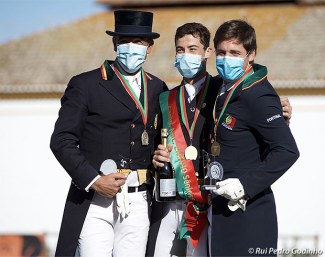 The 2020 Nationals were held at the Portuguese state stud, Coudelaria de Alter, in the village of Alter do Chao. The wonderful, traditional facility with a big outdoor arena and seating area provided a championship feel to the event.

The 2020 Nationals co-incided with the CDI Alter do Chao and mixed classes of international and national tests led to an unusual system for ranking especially the Children division (Juvenis) in which one rider competed in the CDI classes, but the others not. The one existing Portuguese pony combination - Francisco Braz on Der Kleine Choco Boy - remained unranked and undecorated.

With the other divisions, the Championship was more clear cut and the CDI classes counted for points, although with the seniors the first two rounds - Grand Prix and Special - were a CDI test and the third round - the Kur to Music - was a national class.

Torrao Heralds a Change of Guard

The Grand Prix Championship was the most exciting to watch as the competition played out between riders from the old generation, one of them making a brilliant come back to sport, and the new generation signalling the future of Portuguese dressage sport.

The 27-year old Joao Miguel and the 11-year old Lusitano stallion Equador (by Quo Vadis x Hostil) achieved unprecedented high scores for Portuguese dressage from the international panel of judges, which included Leyman (BEL), Pinteus (POR), Saleh (FRA), Ebert (GER), and Van der Heijden (NED). In the Grand Prix they earned a winning, personal best score of 77.348% and in the Grand Prix Special they smashed it with a huge 79.042%. On Sunday they rode a winning 83.875% in the national Kur to Music to become the undefeated and reigning Grand Prix champion.

Torrao is the head rider at Monte Velho and trains with Coralie Baldrey on a daily basis. In 2019 he also worked with Carl Hester for one summer. That year owner Monte Velho sold a share in stallion Equador to the Belgian-Polish couple of business entrepreneurs Marc Lebbe and Katarzyna Gontarska.

The "old" guard of Portuguese dressage sport was sandwiched on the podium by a new generation of young men. Daniel Pinto made his long awaited come back on the 14-year old Portuguese sport horse Santurion de Massa (by Munchhausen x Estoiro), who needed almost two years to return to fitness after an injury. The pair made its come back to the arena in the spring of 2020 and rode in the CDI in Beloura in August, before heading to the Nationals.  The 53-year old Pinto and Santurion also achieved personal best scores at Alter do Chao with 74.587% in the Grand Prix, 76.362% in the Special and  80.150 % in the national freestyle to finish second overall for the silver medal.

The fight for the bronze medal was a tough one. Four-time Portuguese champion Maria Caetano brought her rising Grand Prix horse, Juan Cordeiro's 10-year old Lusitano Fenix de Tineo (by Rubi AR x Oheide) to the event and faced heavy competition from up-and-coming duo, Vasco Mira Godinho aboard the 9-year old Lusitano stallion Garrett (by Unico x Go-Go), owned by Maria Teresa Moitinho de Almeida and Christine Jacoberger. In the end it was the 31-year old Godinho who ended up on the bronze medal step of the podium after placing third in the Grand Prix with 72.196%, fourth in the Special with 71.596% and third in the national freestyle with 74.935%.

In the Children division for 12 to 14 year old riders on horses, only one rider competed in the CDI classes, Manuel Abreu Clemente on Gaviao, and he ended up with the bronze medal. The gold was for Lara Sofia Dias Arruda on Violino and the silver for Guilherme Chaves on Maestoso Tiberia.

The junior division was full on though, with 12 riders competing in the CDI classes. The title went to 18-year old Marta Fernandes Marques aboard her boyfriend Joao Victor Oliva's 9-year old Brazilian bred and rising Grand Prix horse Lusitano Husseim VO (by Almansor da Broa x Dragao II). She won the team test with 68.606%, was second in the individual with 68.323% and first in the freestyle with 72.580%. The silver went to Manuel Resina Antunes aboard the 6-year old home bred Lusitano Jackpot do Penedo (by ??). They were seventh in the team test (66.121%), won the individual (69.294%), and were third in the freestyle (69.605%). The bronze was for Rita Rodrigues on her 12-year old Hanoverian bred mare Festina (by Fidertanz). She was third in the team test (67.424%), fourth in the individual (67.147%) and second in the Kur (69.905%).

Seven Young Riders competed in the CDI classes that were part of the National Championships and Catarina Lucas Lopes surfaced at the top for the title. Aboard the 10-year old Lusitano bred Ferrolho (by Pino x Nanquim), with whom she won the Portuguese Developing Grand Prix Horse Championships only two weeks ago, Lopes was third in the team test (68.441 %) behind two Italian combinations, second in the Individual (68.882%) and second in the Kur (68.285%). Her overall total ranked her first amongst her country mates. The silver medal was won by Catarina Costa on the 9-year old Danish Trakehner bred Kut N’ Move (by Imperio x Le Rouge), scoring 67.971%, 67.294% and 69.290%. Andre Jose Bras and the Alter state stud's 13-year old Lusitano Coronel (by Rubi x Gabiru) were good for bronze with 66.265%, 65.353% and 67.090%.

Three pairs contested the Under 25 division and it was Martim Meneres who struck gold and claimed his fifth, consecutive National title; yet his first in the Under 25 division. Aboard the 11-year old Lusitano Equador (by Peralta), he was undefeated in the first two rounds, posting 71.824% in the Inter II and 72.513% in the short Grand Prix, and placed second in the Kur with 76.225%. The kur was won by Francisco Vila Nova and the 14-year old Westfalian Sir Saburo (by Sir Donnerhall) with 76.250%. Vila Nova was last year's Portuguese U25 champion and the country's sole representative at the 2020 European Under 25 Championships in Budapest this summer. At this year's nationals he ended up with silver after also scoring 69.912 in the Inter II and 71.051% in the short Grand Prix. Mario Joao Freire and his 10-year old Lusitano Filosofo got the bronze with  67.735%, 67.590 % and 72.250% scores. This duo was fourth in last year's Portuguese Young Riders Championships.