Lord Leatherdale Moves to the U.K., Schoolmaster for Isobel Lickley 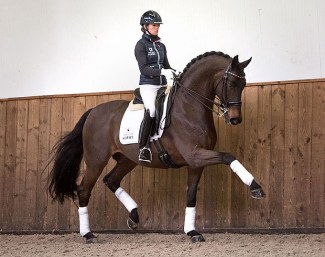 The 17-year old renowned breeding stallion Lord Leatherdale has moved to the U.K. to be the schoolmaster for British junior rider Isobel Lickley.

Lord Leatherdale is a Rhinelander bred stallion by Lord Loxley out of Fairless P (by Ferragamo x Anmarsch). He is bred by Werner and Heike Pleines in Germany.

He was licensed at the 2005 Westfalian Stallion Licensing in Munster-Handorf and first stood at stud at Ferienhof Stucker in Germany before moving to Van Olst stables in The Netherlands, where he thrived as a breeding stallion. He has sired licensed offspring Chippendale, Everdale, Glamourdale and Fairytale (now gelded).

In 2015 Van Olst stables announced the "re-focus" of Lord Leatherdale from breeding to sport. Up till that point he had only once been competed in Germany, under Danish Daniel Bachmann Andersen, at the 2011 CDN Zierow.

He was trained at home to Grand Prix level by Anne van Olst, Severo Jurado Lopez and Charlotte Fry, but he never achieved any significant successes in the competition arena, even after 2015.

Fry competed him at two internationals, their first at the 2016 CDI Roosendaal indoors at Young Riders level where they scored 65.877%in the team test and 57.632% in the individual. Four months later they also contested the CDI Nieuw en St Joosland in April 2017 and had 64.781% in the team test and retired from the individual class. At national level Fry and Lord Leatherdale rode up to Intermediaire II level.

Begin of Sport Career in the U.K.

Lord Leatherdale's actual sport career seems to have started at the ripe age of 17.

Four weeks ago he moved to the U.K. to become the schoolmaster for British pony rider Isobel Lickley, who recently made the transition to junior level. The Lickley family has been long-time friends and collaborators with Van Olst.

"Thanks to the amazing generosity of Anne and Gert-jan van Olst this amazing horse has joined my team," said Isobel. "None other than Lord Leatherdale himself. I’ve been pinching myself every day and today we got a chance to ride a show. He’s only been with me for 4 weeks but we had a great time."

Izzy and Lord Leatherdale made their show debut last weekend at the premier league show at Keysoe. They scored 65.23% to place 15th.

"I’m still finding the buttons and we had lots of unnecessary one time changes but he was fantastic," said Lickley.