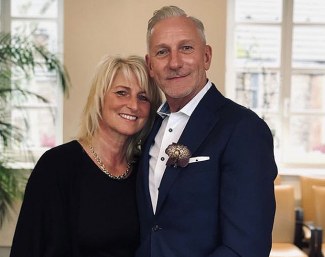 German dressage trainer Claudia Haller married her long-time partner, Uwe Ostwald, in Meerbusch, Germany, on 14 December 2020. Haller is mother to former German U25 team rider Juliette Piotrowski and coach of numerous German youth rider combinations. Due to COVID-10, the ceremony had to be kept small. Ostwald is a Dusseldorf based insurance agent for Allianz.

Danish equestrian journalist Britt Carlsen, the editor in chief of Danish magazine Ridehesten, has handed in her resignation. After 25 years on the job and being the backbone for the magazine, Carlsen wants to explore new horizons and has accepted a job with Zibrasport, a Danish horse media company that will be handling the press and media relations for the 2022 World Equestrian Games in Herning. Zibrasport is owned by Niels Zibrandtsen (father of Danish team rider Anna Zibrandtsen) and Helgstrand Dressage.

Ridehesten is published by the company Wiegaarden, led by Jørgen Bak Rasmussen. Upon Carlsen's departure, he stated, "congratulations to Zibrasport and Niels Zibrandtsen - they get an experienced Grand Prix horse in the stable." Britt will begin at Zibrasport on 1 February 2021.

On Saturday 19 December 2020, Canadian international Grand Prix rider and now 4* dressage judge Lee Tubman proposed to his girlfriend Sarah Lockman, the 2019 Pan American Games individual gold medal winner, and she said Yes!. The 32-year old Lockman is based in California and is aiming for U.S. Olympic team selection for Tokyo aboard the Dutch warmblood First Apple. She and Tubman (58) have been dating for a year. "I can’t wait to spend the rest of my life with my knight in shining armor," Lockman wrote on Facebook after the proposal.

Equitana 2021 will not take place on 13 - 21 March 2021 due to COVID-19. Equitana, the biggest equestrian trade fair in Europe held in Essen, Germany, cannot take place due to the ongoing Covid 19 pandemic. "This decision was not easy for us, but we made it in consultation with our exhibitors and partners," said organizer Benedikt Binder-Krieglstein. "Looking at the evolution of the ongoing pandemic it is unclear when events will be able to reopen safely in the coming months. We are currently feeling the uncertainty among our exhibitors as well. Our decision has now provided planning certainty for all participants.”

Rob van Puijenbroek's 9-year old Dutch warmblood bred Genesis Begijnhoeve (by Jazz x Silvano N) is on the mend. The liver chestnut stallion, who is licensed for the Belgian Warmblood and Oldenburg society, slipped and fell in the pasture on the wet grass and injured his stifle. In the end he needed an operation "to clean the joint" and the horse is back on the road to recovery. Rob's husband Tommie Visser has competed Genesis in the international small tour at CDI's in Compiegne, Deauville, Zakrzow and Lier.