Re-Training the Dressage Horse: Praise Even the Smallest Steps Generously 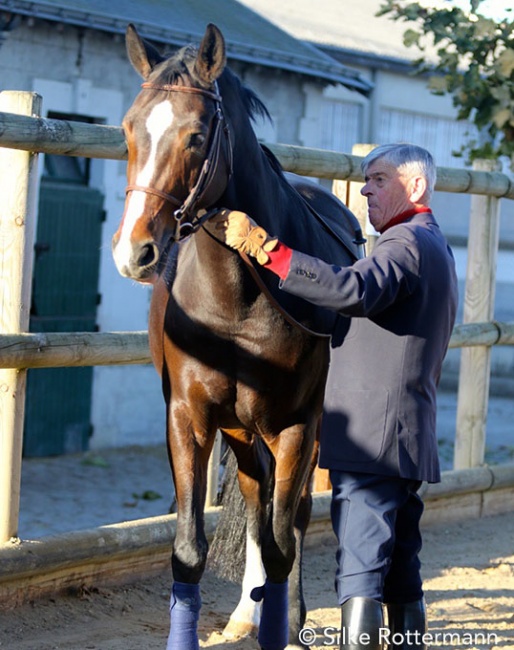 This article is a continuation of Re-Training the Dressage Horse: To Recognize Problems and Work On Them

Retraining means not only to delete things wrongly learnt in the years before, but also developing self-confidence and trust into the rider. The work has to be planned in a way that the horse can take it without getting stressed, because only relaxed horses are able to learn.

Praise Even the Smallest Steps Generously

The challenge which a horse to retrain poses on his rider might be very different in detail. Common to all is that the horse has learnt something not classical, which needs to be deleted. Too often it is forgotten or considered the less serious problem that a not  so-correct training has left a mental imprint, but it is decisively dependent on these mental traces if a correction becomes successful.  The retraining has to focus first and foremost on restoring the horse’s faith. It is important to find out which exercises and why the horse considers them difficult or even painful, or which even trigger fear.

We should not generally avoid these, but prepare them very thoroughly so that the horse feels they are easy and the feeling of physical and mental overtaxing gets deleted.

During this process it is of uttermost importance to generously praise the horse for the tiniest progress and keep the demands on a level which the horse can easily take without getting stressed. Is the horse not mentally relaxed, it will not learn anything. Overall when retraining a horse only a moment of overtaxing it, will throw it back again in its positive development.

Retraining, correction, must under no circumstance be considered as only a technical procedure, but on the contrary as work which restores the horse’s self-confidence and faith. For this reason it is essential to observe the horse carefully and not only during the daily work, but in the general handling.

The general behaviour of Milady at the beginning of our partnership was rather one of mistrust. In the stable she occasionally bit out of the blue, her facial expression was often sour, and she was pretty disinterested in humans. During certain exercises she immediately showed nervousness so I had to better prepare and relax her mentally.

Today, after a year of daily work, I feel especially happy looking at my mare and see that she seems more content as a horse and I think this is my biggest achievement of our short partnership. In the daily handling she is more even tempered, more and more interested in the work, and her eyes are more awake.

Terms like "take the contact" or "take the bit" are commonly known, but they say nothing more than the horse accepting the bit by yielding with the lower jaw and advancing its ears above the bit, instead of the nose being pulled towards the breast by the rider. Through the correct yielding of the lower jaw the communication with the horse gets refined. It is important that the yielding of the jaw precedes that of the poll. However Milady had not learnt this procedure correctly and showed little faith in the rider’s hand. That meant that I first had to show her the correct yielding and then to ride her in the softest and most comfortable contact.

A horse’s correct yielding requires a rider who himself yields in exactly the right moment to positively reinforce the horse—ideally this means that the rider senses the moment the horse yields and yields himself a fraction of a second before the horse does. I taught Milady the correct yielding first in halt, even though yielding should usually happen out of forward movement, but to show the mare the procedure itself, it made sense to request it first in halt. For that you stand on the left side of the horse, take the shortened reins in the right hand and position them relentlessly and high enough against the horse’s neck. That way it gets animated to yield with the lower jaw.

This exercise can also be practiced by taking the reins in both hands, but one has to take care the tension of the reins is even then. Because Milady did not yet respect the hand enough, she first started to walk backwards instead of yielding which is a typical reaction. With such it is decisive to maintain the tension of the reins by quietly walking backwards with the horse until it halts and yields correctly.

As soon as horses have understood this procedure one can later start requesting the yielding in walk and trot.