Look Who's Back: De Champ 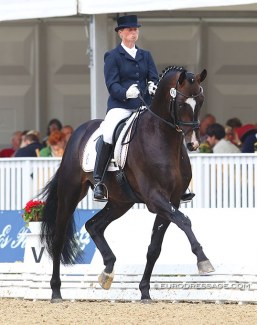 One of Paul Schockemöhle's most beautiful stallions on his roster in the early 2010s was De Champ, a Daddy Cool x Caprimond offspring, who competed at two World Young Horse Championships in Verden. In the spring 2015 the Trakehner cross bred beauty disappeared from the show scene, only to resurface several years later.....in Mexico!

De Champ is born in 2006 at Helmar Bescht's yard in Schlieckau, Germany.

The gorgeous dark bay stallion was produced out of dam Championess (by Caprimond x Argentan I x Wicht). De Champ became her most famous offspring although six in total are registered for sport with the German equestrian federation.

"Daddy Cool did the stallion performance test for in our stable," Julius Bescht told Eurodressage. "He did a great job and I decided that he is the perfect match for my mare Championess."

The interstingly marked De Champ has a curious face, something also reflected in his character.

"De Champ was a funny foal," Bescht continued. "Normally all foals stay near the mother, but he wanted to explore the world by himself. He was interested to run around. It didn't matter if his mother was there or not."

De Champ sold as a foal to stallion keeper Paul Schockemöhle and was approved at the 2008 Oldenburg Stallion Licensing in Vechta. British dressage investor, the late Tony Pidgley, later bought an ownership share in the stallion.

He did his 30-day stallion performance test in Neustadt/Dosse in March 2010 and scored 8,93 for dressage and 7,96 for show jumping to finish on a total of 8.56 points. De Champ was never really popular with the breeders and only 17 of his offspring are registered for sport in Germany.

In 2012 they returned to the World Championships in Verden and landed 15th place in the 6-year olds, losing points because of tension. They did not make it back to the 2012 Bundeschampionate.

The combination only returned to the arena two years later, in 2014, with a start at the local show in Holdorf. A year later they competed in the 2015 Nurnberger Burgpokal series with starts at the qualifiers in Hagen and Redefin. The latter show on 2 May 2015 was their last.

De Champ disappeared from the show scene, only to resurface two years later in Mexico.

The stallion had sold to Gonzalo Senosian Ruilobo and the ride was given to Jose Luis Enrique Padilla Liekens, who competed him at the CDI Mexico City in December 2017 at small tour level.

In March 2018 the horse sold to the now 22-year old Carlos Maldonado Lara. He immediately rode the horse  in two CDI's in Mexico City in April and May in the hopes of qualifying for the 2018 Central American and Caribbean Games. However, the partnership was too new and with their first CDI scores in the low sixties they did not get selected.

"At the time of bought them we only had two weeks to train, so the time was tight (to qualify) and we could not perform 100%," Carlos explained to Eurodressage.

After that De Champ vanished from public sight. Maldonado went to Florida with his number one ride, the small tour horse, the KWPN bred Massimo (by O Jasper x Prestige Forever), to compete at the 2019 Global Dressage Festival and De Champ stayed behind in Mexico with his trainer Antonio Rivera.

In the summer of 2020, Carlos re-connected with De Champ while training with his new coach, Chris von Martels, at Millstone Farm in Connecticut

On 6 December 2020, they returned to the competition ring and rode their first Prix St Georges test again since 2018 at the national Wellington Classic Dressage show. They scored 69.118%.

Two days ago, on 9 January 2021, Maldonado and De Champ kicked off 2021 Wellington season with their second start at the national show on the Globa show grounds. They rode in a national Prix St Georges test and scored 73.088% to place second.