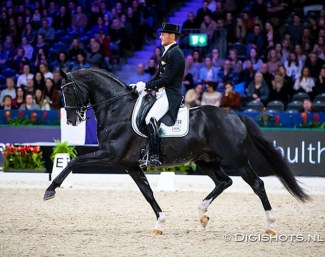 At the moment the Dutch government has prohibited sport competitions due to corona, but the measures count until 9 February. If they will be relaxed and competition allowed, Tolbert will be the debut venue for Total U.S.

The Oldenburg bred stallion is 9-years old and is by Totilas x Sir Donnerhall. He is bred by Paul Schockemöhle and owned by Gaston Glock.

Gal has competed the stallion only three times so far, winning each time. They won the 2018 Pavo Cup Finals for 6-year olds. A year and a half later the horse made its Prix St Georges debut in January 2020 in Tolberg and won with 81.985%. Two weeks later he competed in a national class at Jumping Amsterdam and scored 75.539% in the PSG and 80.458% in the Kur.

In an older interview with Dutch newspaper NRC, Gal stated that he believed Total U.S. is better than Totilas. With Toto Jr (by Totilas x Desperados) Gal won the 2020 Dutch Grand Prix Championships in September. He will be lining up three horses for possible Dutch Olympic team selection for Tokyo with Zonik as back-up.