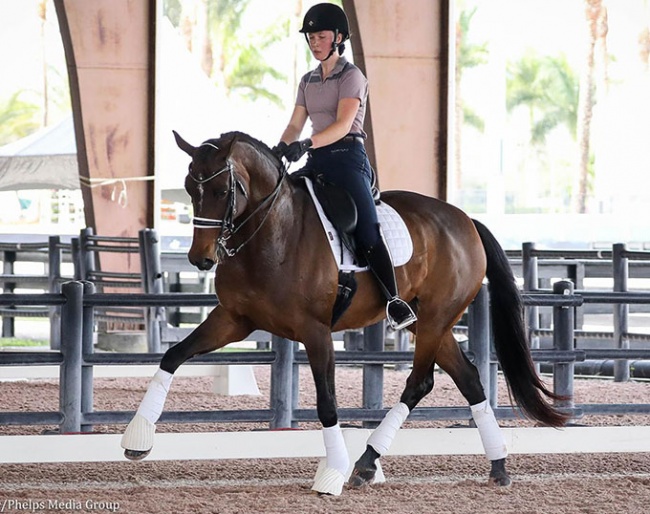 With a lifetime of experience as a competitive dressage rider and a long history coaching elite athletes in the sport, Dover brings his expert eye and well-earned wisdom to the one-on-one sessions at the RDHCW. Here are eight key points from this year’s clinic.

1. Have a vision of greatness

“In every moment, from half-halt to half-halt, you’re seeing a movie in your mind, and the movie is you and Tiko being the most beautiful, grand, fearless, fierce, and invested combination. It doesn’t mean something won’t ever go wrong, but it means your vision is clear: your rhythm, your sense of cadence, your sense of your half-halt, your sense of greatness in every step.”

Dover offered this advice to Allison Nemeth (Flemington, N.J.) as she worked on an extended trot with Tiko, a 10-year-old Danish Warmblood mare owned by Karen Nemeth. Dover repeated this concept in nearly every individual session, driving home the importance of visualizing the best version of your horse in the movement at hand.

“If you’re not seeing it in your mind, how do you create it? If the only eyes you’re looking at everything in life is your eyeballs, how do you create the next thing?” Dover said to Sydney Lipar (The Woodlands, Texas) as she rode Herzkonig, aka Percy, a 17-year-old Hanoverian Gelding owned by Denise Lipar. “I teach in pictures; I try to make you see a movie. In your mind, when you’re riding in the walk, and I say you’re going to do an extended trot for five strides, you’re going to see only one vision, and that’s you and Percy walking with so much collection and energy that in the next half-halt, which comes from your thought, you see only one thing.”

Dover frequently invoked the top riders in the world, including Laura Graves, Charlotte Dujardin, and Isabel Werth, as riders who have only one vision with every horse they ride, and that vision is of perfection. They don’t leave room for “what ifs.”

2. Give the lightest aid possible

“If a fly touched your horse’s side and he didn’t react, he’d get bitten up. If you touch his side and you think, ‘It doesn’t matter if you don’t go forward or react,’ he’s always going to require that you do more than that to make him do more than what he’s doing. You can’t expect him to react in one moment with that amount of spur, if in another moment, he didn’t think that he was required to react.”

Dover brought up the innate sensitivity of horses in his opening lecture and referenced it throughout the sessions. Horses can feel a fly land on their side and react immediately with a twitch of the skin, he explained, indicating that they are capable of responding to the lightest touch.

“Every touch is training,” Dover said to Kayla Kadlubek (Fairfax Station, Va.) as she worked with Perfect Step, her 20-year-old Hanoverian gelding. “That’s why you see beautiful dressage riders and their feet are faced [toes pointed in]. You don’t see a lot of spur. You rarely see the spur touch. Even the thought of the touch is more than enough. The spur is a refinement. It’s a tool, for sure, if they don’t listen to the lightest possible aid. But the more you use it, the more problematic it is.”

3. You need to be in control of pace, tempo, frame, and length of stride

“There are four things that you have to always be in control of from half-halt to half-halt,” Dover told Averi Allen (Pleasant Hill, Mo.), who rode Superman, Jonni Allen’s seven-year-old Hanoverian gelding.

“One is the rhythm of the horse, meaning the rhythm of his footfalls in each gait, how fast or how slow his feet come to the ground.

“The next thing is the tempo: how fast or how slow in each gait he’s going over every meter of ground.

“The third thing is his frame: You decide how high, how low, how long or how short his frame is from your vision.

“The fourth thing is his length of stride. Collection isn’t a subtraction from extension. Collection is an addition of engagement into the collection from his extension. It’s up to you to own those four things, and that can only happen when you clearly know what you want.”

“Don’t forget to tell him when he’s a good boy,” Dover told Kadlubek.

“Say to yourself, I don’t need to keep this all together. I just need to ride, keeping my legs beautiful, keeping my hands beautiful, riding the half-halt that makes them come up to that beautiful spot. And then the key is: ‘Good boy! Good boy! Keep doing it yourself! Keep being motivated so that I don’t have to work so hard!’”

5. Use your breath in three steps

Dover helped Lexie Kment (Palmyra, Neb.) with Montagny von der Heide, Laureen Van Norman's 16-year-old Trakehner gelding, in honing precision in the location of each movement and transition. He explained that the movement should begin when the rider’s body is aligned with the letter, and using breath to prepare and execute a movement can help.

“When the horse’s nose arrives at the letter is the beginning—the breath in. Close your legs, close your fist. Then the breath out. It’s three steps: breathe in the nose; bring your aids on and say, ‘this is where we’re going now’; and as he starts into his half-halt, you breathe out and he goes there.”

6. Collection and extension live within each other

“The true distance between the grandest collection and the greatest extension of any gait is the thought,” Dover told Lydia McLeod (Charleston, S.C.) as she rode her nine-year-old KWPN gelding Honneur B. “In every step of the most collected trot—the piaffe—the horse’s desire is still, ‘I could do an extended trot. I’m trotting on the spot but I could do an extended trot.’ That means he has each one of those in the other at all times. While he’s in the extended trot, he could piaffe at any stride because he’s through and on the aids. And when he’s in the collected piaffe, he’s forward-thinking. Those are what we call access points, where you truly know how to access collection and extension and you don’t lose one for the other.”

7. Have a purpose for each part of your warmup

While working with Hannah Irons (Queenstown, Md.) on her warmup routine with her own Scola Bella, a 13-year-old Hanoverian mare, Dover illustrated the need for a mindful warmup, recalling an accomplished student he’d coached in the past.

“One of my students was an Olympic rider who’d had loads of training. She would get on every horse and go through the exact same training [routine]. I could tell you every single time what they were going to do; it was always exactly the same. There is a lot to be said for doing that, provided it all brings the horse to a perfect place to do the next thing. But she had one horse that got better and better that way and another horse that, by the time she did all that, was exhausted. By the time she went into the ring, instead of having the most brilliant animal, he was brilliant 20 minutes ago.”

For example, Dover says, if you get the leg yield that you want in three steps, you don’t necessarily need to continue all the way across the diagonal.

“Don’t stay [in the movement] so long that she says, ‘OK, I’ve done it, [my rider] hasn’t said ‘good’ and now I’m going to fail.’ Every step that you’re going around where you’re not creating something are just steps. You’re either making it better or you’re just going around for the sake of going around. So when you get great feelings, when she’s done what you want, you don’t need to keep doing that. One half-halt that brings her to a perfect state of balance and attention, and you say, ‘Thank you. Now we can go on to some other things.’”

8. Throughness is a solution to spookiness

Early in their session, Allison Nemeth and Tiko had some trouble where Tiko wanted to shy away from the video camera at the end of the arena. Dover explained that while spookiness is an innate part of horses because of their evolution as a flight animal, it doesn’t mean that spooking is inevitable.

“When a horse is out in the field, they look around, because they’re animals of flight. Their head and neck are in constant motion,” said Dover. “Except when they—stallions especially—start to show off, and then you’ll see them go on the bit with no bridle at all. They’ll arch their neck and start passaging around, floating all over the place. They’ll get that shape for a period of time because their brain gets invested in that moment of showing off. They’re concentrated in that moment and they’re not spooking or shying and jumping away from things. And when that moment, under saddle, becomes the way they’re trained such that their brain is always going, ‘I’m on the aids. Allison is talking to me. We’re having this conversation back and forth, totally balanced, I have no other thoughts other than what Mom wants and I’m waiting for her next cue.’ That’s when spookiness goes away.”