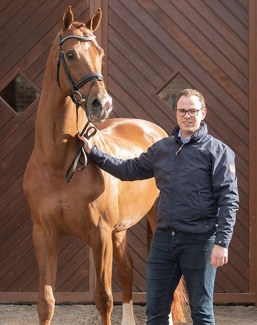 The KWPN top breeding sire Vivaldi has returned home to The Netherlands after being leased to Blue Hors Stud in Denmark for one breeding season.

The stallion owner and horse dealers' duo already had bought back a 50% ownership share from Dutch investor Ton Kies more than a year ago.

Kies, the man behind the company Exquis, has been gradually pulling out of his involvement in dressage over the years. He used to sponsor dressage riders Hans Peter Minderhoud and Anne van Olst.

During his time in Denmark, Vivaldi was approved for Danish warmblood breeding after being presented in hand at the 2020 Danish Warmblood Stallion Licensing in Herning.

Vivaldi is one of the most popular and influential Dutch stallions in international dressage horse breeding and ranks 6th on the WBFSH’s world ranking for dressage sires.

Vivaldi was competed up to international small tour level by Hans Peter Minderhoud, but did not reach Grand Prix. In 2013 he was retired from sport to focus on breeding.

Blue Hors decided not to extend the lease for the 2021 breeding season.

"The agreement was for one season," Joop van Uytert told Eurodressage. "I wanted to keep him available for Dutch breeders. There is a big demand for him."