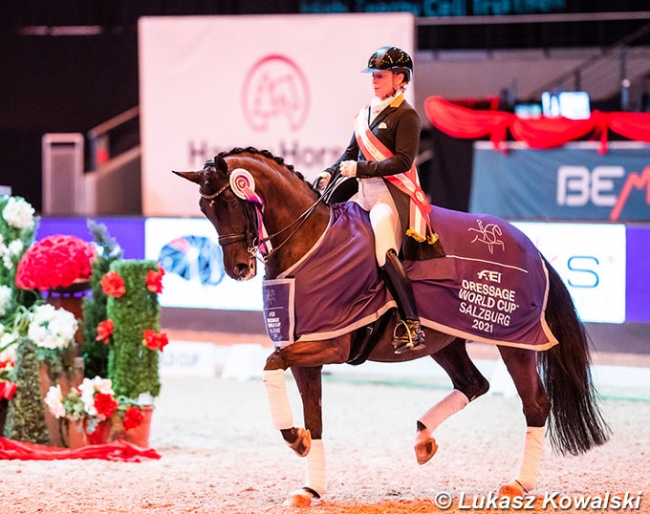 Isabell Werth and Weihegold waltzed to a Grand Prix victory at the 2021 CDI-W Salzburg in Austria on 23 January 2021.

Dressage enthusiasts had to get up with the cock-a-doodle-doo of the rooster on Saturday morning, if they wanted to watch the full Grand Prix test, a warm-up class for the World Cup qualifier, only the second of the 2020-2021 indoor show season due corona. All seven (out of 10) others have been cancelled.

The CDI-W Salzburg was also the first European international where are all dressage riders had to wear helmets according to the new FEI rule requiring mandatory protective headgear.

Werth and Weihegold Stick to the Script

As expected Werth's 16-year old Weihegold appeared a bit ring rusty after a sixth month break from competition and her first indoor of the year. However, as expected from the script the judges were in agreement on them being the winners of the class. All five judges - Claudia Thaler (AUT), Gabriela Valerianova (CZE),  Katrina Wuest, Raphael Saleh, and Thomas Lang -  placed the pair first.

Weihegold has never been a big moving horse but her class lies in her accuracy, correctness and exceptional passage. In Salzburg dressage fans were again witness of these facts. The mare barely performed an extended trot, the second one was even irregular at the end of the diagonal, and also the extended walk was very muddled in the clarity of rhythm, while the collected was just short. However, the passage was wonderful, springy and electric. The trot half passes were well ridden, the rein back good, and in canter there was much quality in the very secure and effortless tempi changes, pirouettes, and clear zig zag (which lacked some ground cover). Normally Weihegold's piaffe is also steadfast in the rhythm but today not so much. In the first piaffe she was searching for it, the second was better but with the hindlegs more out. The piaffes looked less confident in the rhythm and balance, but Werth rode the mare expertly, carefully waiting for her to deliver instead of stressing her into the movement.

Hot on their heels was Jessica von Bredow-Werndl aboard Beatrice Burchler-Keller's 14-year old Trakehner mare Dalera TSF (by Easy Game x Handryk). Aside from one big bobble in the one tempi changes, they produced a faultfree ride.

Jessica and Dalera showed a wonderful rein back, good elastic and large trot extensions, a super springy passage and smooth transitions in and out of the piaffe. The extended walk was good, but the collected walk got close to ambling for a moment. There was a small hesitation out of the second piaffe. The two tempi changes were good, but could be more uphill oriented, in the zig zag the elasticity to the right was better than to the left, but the movement was smoothly ridden. In canter the nose got a bit behind the vertical though. The pirouettes were confident and Werndl finished with a very nice rhythmical final centerline.

The bay Delaunay is in his 7th season at international Grand Prix level and a routinier. The start of the trot half pass right could have been tidier, but there was some very regular crossing. The rein back was not square, but there were good backwards steps. The trot extensions were expansive and the extended walk had good overtrack, but the nose needed to be more out instead of dropping deep. The collected walk was short.  While the sillhouette was nice and quiet throughout the test, the horse appeared fidgety in the mouth. Today the passage lacked some power from behind, and while the piaffe was nicely on the spot, the balance remained an issue with the horse becoming wide in front.  The two tempi changes were clean and easy, the ones correct and straight. There was good energy in the canter extension, the zag zag was clear, but lacked ground cover. The pirouettes were nice, in the one to the right there could have been a bit more bending.

Dorothee Schneider and the 13-year old Hanoverian gelding Faustus (by Falsterbo x Forrest xx) placed fourth with 75.174% (low score 73.6%, high score 77.06%). They showed a very nice halt at entry, and extended trots in which not only the stride but also the frame was lengthened (although he could have motored a bit more from behind). The passage was lightfooted, the first piaffe was a bit hesitant. There was good marching in the extended walk, the collected was classically correct. The piaffes were still a bit hesitant and searching, getting wide behind. The canter work was forward and expressive with good, ground covering tempi changes. The pirouette right was a bit big. At all times the horse was soft and elastic in the contact.

Helen Langehanenberg and Günther Fielmann's 13-year old Holsteiner mare Annabelle (by Conteur x Linaro) were fifth with 74.457%.  The long legged, elegant mare is a leg mover and could swing more over the back. This was obvious in the rather limited trot extensions. Although 13 the mare is still young at Grand Prix and still developing in strength. The passage did not show real collected and although the piaffe is full of promise, it is still unbalanced, getting very narrow at the base and wide in front. The extended walk had good overtrack, the second piaffe-passage was better. The canter work was ridden in a very collected way, and one was wished for some more striding. The shorter canter gave the rider of course more control, so the tempi changes and zig zag were faultfree but short. The left pirouette was a small volte, the right one was much better. Also the passage on the final centerline was the best one of the test.

Swedish Antonia Ramel and her 15-year old KWPN gelding Brother de Jeu (by Voice x Jazz) are really coming into their own over the past year and finding each other as a combination. The half passes were rhythmical, there was good diagonal pairing in the rein back, and the trot extensions were large. Overall the nose needs to be a bit more in front, as Brother is kept too tucked behind the vertical. The first piaffe was elegant, despite some slight back stepping. The extended walk was ground covering, but again the nose needed to come more out. The collected walk was too short in stridelength. The passage was regular and elegant, there were big two tempi changes that could have been a fraction straighter in the body. The extended canter was quite flat and the zig zag did not have enough ground cover, being too hand held, but the one tempi changes were sweet. They scored 73.500% for 6th place.  Danish sensation of 2020, Carina Cassoe Kruth and the 10-year old Danish warmblood mare Heiline's Danciera (by Furstenball x De Niro), received massive scores on home turf in Denmark last year (with an 80% in the Grand Prix Special in Herning), but on their second time across the border for a Grand Prix CDI, the marks are more reflective of their work in progress. The black mare reminds of Weihegold, but then with the scope and quality of gait for top level. The piaffe, however, is a major issue at the moment. She crosses behinds and leans on the forehand, a clear sign she is still struggling with the self carriage and balance in this movement, which is the epitome of collection. That being said, Danciera has a smashing passage, super trot extensions, a good extended walk with nice V-moment in the rhythm. There were mistakes in the two tempi changes, the zig zag was clear although the mare was anticipating the changes. The ones were not straight in the body and got shorter towards the end of the diagonal. There was a lovely silhouette in the pirouettes, but they were still too big. They scored 72.804% Australian Simone Pearce and Gestut Sprehe's 14-year old Hanoverian licensed stallion Destano (by Desperados x Brentano II) finished 8th with 72.043%. Pearce's hopes were high after having achieved a 76.261% at the CDI Brno in August, but there were a few bumps in her Salzburg Grand Prix ride. Destano showed nice trot extensions, the half pass to the left was a bit less smooth than the one to the right. The passage could have a hindleg more engaged, the extended walk was outstanding, the collected walk correct. The piaffe was nicely on the spot, but there needs to be more lift in the withers so the stallion comes off the shoulders. He produced big two tempi changes, but the ones were broken. The flying change after the extended canter was very early to the marker. The zig zag needed to cover more ground to the left, but looked promising. Also the pirouettes can potentially become outstanding with more sit. On the final centerline the piaffe was nice, but in passage he swayed in the hindquarters.