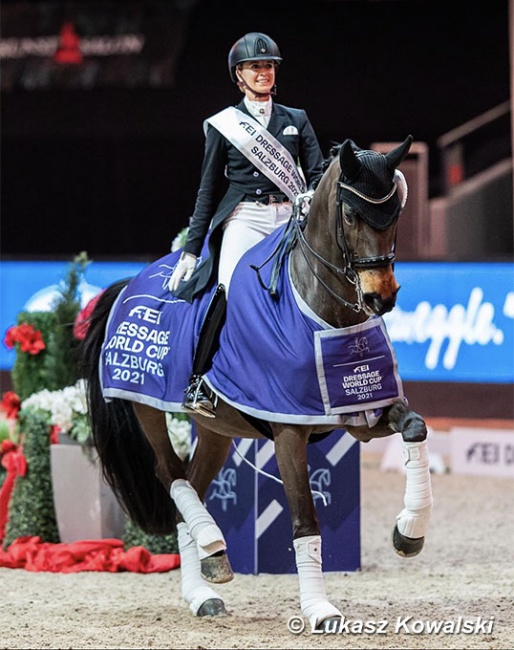 It has been a long wait since the first leg was staged last October, but the resumption of the 2020/2021 FEI Dressage World Cup™ Western European League didn’t disappoint when Germany’s Jessica von Bredow-Werndl and Dalera BB swept to victory in Salzburg, Austria on Sunday 24 January 2021.

In a cracker of a competition, the pair who helped claimed team gold at the 2018 World Equestrian Games threw down a superb performance when second-last to go in the field of 13. And their score of 87.960 ousted the partnership that have claimed the coveted Dressage World Cup title on the last three occasions, Isabell Werth and Weihegold OLD who had to settle for runner-up spot on their mark of 84.720.

Reminding the world that German dressage is in great shape, Helen Langehanenberg slotted into third with Annabelle when putting 81.340 on the board while Dorothee Schneider filled fourth place with Faustus when posting 80.650. Only one other horse-and-rider combination managed to break the 80 percent barrier, Swedish star Patrik Kittel steering Delaunay OLD into fifth on a mark of 80.125.

It was another Swedish pair who held the lead at the halfway stage, Antonia Ramel and Brother de Jeu who were on the bronze medal winning side along with Kittel and Well Done de la Roche at the 2019 European Championships in Rotterdam (NED).

Ramel produced a lovely test from the 15-year-old gelding to score 77.460 today but, third to go after the break, Werth moved things on to a completely different level when scoring more than seven percent higher. And when both compatriot Langehanenberg and then Kittel couldn’t get close to bettering that, it seemed the writing was already on the wall.

But von Bredow-Werndl had other ideas.

“I was really ready for it today because Dalera already felt amazing yesterday”, she pointed out. In Saturday’s Grand Prix she finished second to Werth, but that didn’t blunt her ambitions.

“I came in today with the hope to win! We had a very stupid mistake yesterday when she fell into trot before the one-tempis because she thought it was already the last line for the extended trot, and that was more than expensive because the one-tempis count double. Today I knew if we got things right then we had a really good chance!”

And they got it absolutely right, the 34-year-old rider and her 14-year-old mare nailing it with a superb test that secured pole position by more than three percentage points over Werth who may not have been all that surprised, as she clearly wasn’t happy with her own performance, shaking her head as she left the arena.

Today’s winning partnership had already beaten Werth and Weihegold twice before - at the Dressage World Cup™ qualifier in Stuttgart (GER) in 2019 and at last year’s German Championships. Werth knew perfectly well that she needed a mistake-free test to keep the pressure on her fellow-countrywoman who is always a strong challenger, so when she didn’t get that she was always going to be vulnerable.

Instead of a full season of qualifiers, the Western European League has been severely curtailed by the effects of the pandemic, and today’s leg at Salzburg was only the second in the lead-up to the 2021 Final which is scheduled for Gothenburg (SWE) from 31 March to 4 April. In this virus-ridden era it is difficult to predict anything anymore, but another qualifier is planned for ’s-Hertogenbosch (NED) in March and under the revised qualifying criteria the best two results from the Western European and Central European Leagues will count towards qualification.

Today’s result leaves von Bredow-Werndl at the top of the qualification table with Langehanenberg in second, Kittel in third, Morgan Barbancon from France in fourth and The Netherlands’ Thamar Zweistra and Ireland’s Anna Merveldt sharing fifth place.  Austria’s Christian Schumach lies seventh while Denmark’s Carina Cassoe Kruth, who collected eight points when finishing tenth today with Heiline’s Danciera, is in eighth place. A total of nine athletes will make the cut to the Final and Denmark’s Cathrine Dufour, who won the opening leg on home ground at Aarhus last October, at this stage shares that ninth spot with Germany’s Benjamin Werndl.

As von Bredow-Werndl pointed out today it’s not an easy environment for either horses or riders these days.

“Dalera was a bit nervous yesterday but I have to admit I was too! I realise now that it is too long for me to have a competition break for over three months - I really need to compete and so do the horses. Riding the test at home and going to a competition are two completely different things.

"You need to measure yourself against the other competitors, and it’s a more honest way to look in the mirror if you do it at a competition," said Jessica von Bredow-Werndl (GER).

She complimented Show Director Josef Goellner and his team for staging the Austrian event in such a difficult times. The show is taking place without spectators and with rigorous restrictions. “I’m so grateful that the organisers managed to do such a great job and that it was perfectly organised. Everyone feels safe here, everyone is wearing a mask and there is hand sanitiser everywhere - it’s strange, but I’m so glad to be here!”, she said.

She would like to compete in ’s-Hertogenbosch, but brotherly love may get in the way of that. “I want my brother (Benjamin Werndl) to have a chance to go there because he already won one qualifier (at Zakrzow, Poland in October) and he needs to go to another one, and there are usually only four Germans allowed to ride”, she explained.

When it comes to the Final in Gothenburg however, nothing will hold her back. “Oh yes, I’ll be going there for sure - and with all guns blazing!”, she said.

Text by Louise Parkes for the FEI - Photos © Lukasz Kowalski