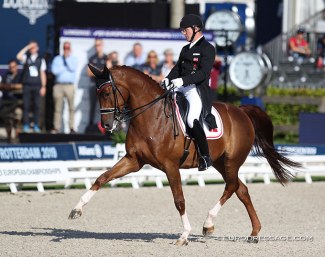 Danish team combination Anders Dahl and Fidelio van het Bloemenhof have been removed from the Danish A-squad and are no longer eligible for 2021 Olympic team selection.

Fidelio's owner, Fiona Bigwood, decided to change the ownership ratio's on the horse, which makes him no longer available for Team Denmark.

He is bred by Luc van der Heyden. Fiona Bigwood purchased the horse in April 2017 from Petra Stroetmann in Germany.

Not Fiona but her husband Anders Dahl made his international show debut on the chestnut at the 2019 CDI Keysoe. The pair scored marks above seventy percent and reconfirmed their shape at the CDI Hagen. They placed fourth at the 2019 Danish Grand Prix Championships and were selected on the Danish team for the 2019 European Championships in Rotterdam, where they placed 22nd in the Grand Prix Special.

In 2020 Anders competed Fidelio at the CDI's in Le Mans and Herning, achieving personal best scores, before the corona pandemic halted competition.

At the start of the new year, the Danish Equestrian Federation announced the new dressage squads for 2021. Dahl and Fidelio were listed in the A-squad from which the Danish Olympic team for Tokyo will be picked.

Two days later, however, Fidelio was removed from the squad.

"The horse has gone back to British ownership," Danish senior team trainer Nathalie zu Sayn-Wittgenstein confirmed to Eurodressage. A Danish majority ownership share in the horse is mandatory in order to be considered for Danish team selection.

On 14 January, Bigwood changed the ownership shares with the FEI, listing Fidelio as owned 40% by herself, 40% by her mother Penny Bigwood and 20% by Anders Dahl. Before that Anders owned 51% of the horse and Fiona 49% on paper.

Dahl confirmed to Eurodressage that his wife made this decision. Bigwood declined to comment.