Look Who's Back: Caroline-Marie Scheufele 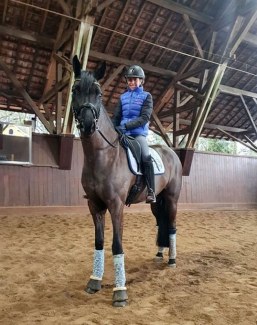 From 2012 till 2015, Caroline-Marie Scheufele was one of the most prominent Swiss youth riders on the international scene. She twice represented her country at the European Junior Riders Championships and in 2015 she rode at Young Riders level. It was her last year in the CDI show ring.

After a five year break from competitive international dressage, the now 25-year old Scheufele is ready to make her come back with new horses, including the PSI auction horse Dante's Pearl.

Scheufele began riding at the age of 10 and had easy access to a professional dressage stable with her family home located next to Pamela and Ted Jonker's dressage yard.

Caroline's heydays in the international dressage arena were in 2012 and 2013 when she competed as a junior aboard the Hanoverian bred Remmington Steel (by Ravallo x Gelria), owned by Ted Jonker. Scheufele made her CDI debut in 2012 in Vidauban, France, and after gaining mileage in Stadl Paura, Roosendaal and Moorsele, they rode at the 2012 European Junior Riders Championships in Berne, where they finished 38th in the individual test. They earned silver at the 2012 Swiss Junior Rider Championships.

In 2013, she got her feet wet at the CDI Vidauban with the Holsteiner Connection (by Caretino x Calvados II), which she only showed once in a CDI, as well as the 2013 Swiss Junior Championships. This licensed stallion came from Burkhard Wahler's barn and was previously shown by Bernhard Fischer and Thomas Schmitz.

In 2015 the then 20-year old Caroline made the transition to Young Riders' level aboard Ted Jonker's Oldenburg bred Quichotte (by Quattro B x Zeus). They showed at the 2015 CDI Prangins in Switzerland, where they placed third three times. Caroline's trainer Ralf Hannöver took over the ride.

Remmington Steel passed away in 2018 at age 22 due to cancer.

Stepping into the Real Life

The 2015 CDI Prangins turned out to be Caroline's final international. Her life took a big turn as she decided to say goodbye to horse, at least for a while.

"I had a break because of studies," Caroline told Eurodressage. "I had lost Remmington and it was quite a shock for me. He was the best junior horse I could ever have asked for. Quichotte was a great schoolmaster, but was too hot to compete at big shows. So, I decided to concentrate on my studies."

Caroline achieved a degree in Business Management in Lausanne and did an internship in retail in Amsterdam, followed by a job in marketing in London.

She only climbed back into the saddle during brief stays at home in Switzerland, where she also reconnected with her younger sister Katarina Scheufele, now 19.

Katarina competed at international pony level from 2016 till 2017 on Now or Never Feivel (by Now or never de Montmain x Millant) and in 2019 was squad listed as a Swiss junior on Don Toyamo OLD (by Don Romantic x Sandro Hit). Katarina has given up riding and is studying art in London.

In 2020 the corona pandemic came and with Covid-19 restricting movement across Europe, Caroline decided to leave London and return home. She rekindled her passion for riding and decided to give her dressage career a second start.

"Due to Covid I left London came back home to our beautiful stable," Caroline explained. "My boyfriend and I have decided to stay in Switzerland. He is very supportive with my riding. I want to focus on riding next to my job.

With big riding plans for the future, Scheufele has welcomed new horse power to the stable.

She has taken over the ride on Nerine Niessen's Fiorano, a 13-year old Oldenburg gelding by Faustinus x De Niro. Niessen showed the chestnut at CDI junior level in 2017 and kept on campaigning him at M-level through 2019. Last autumn the horse sold to the Scheufele family and Caroline made her show debut with him in the Prix St Georges at the Chavannes-de-Bogis competition in October 2020.

"We are now schooling Grand Prix at home and hope to go back in the ring this year," she said about Fiorano.

An exciting, international calibre that joined Scheufele's stable is the PSI auction horse Dante's Pearl, which the family acquired in the 2020 PSI Auction in December.

"I’m super lucky to have Dante’s Pearl, who is a lovely. I hope to go back to the competition ring with her this year. She is only 6 and we are still getting to know each other, but I’m very excited about the future with her. She already feels very much at home already and has a new best friend," Caroline explained.

Hof Kasselmann's Under 25 rider Evelyn Eger brought Dante's Pearl to Switzerland and helped Caroline get started on the mare.

"I will focus this year on both horses and hope to qualify Dante's Pearl for the Bundeschampionate or World Young Horse Championships, hoping that the situation with covid gets better," Caroline added.