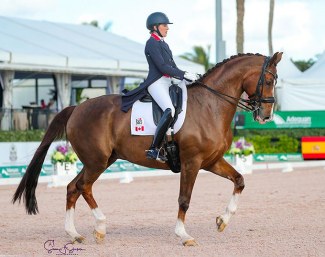 Week five of the 2021  Global Dressage Festival (AGDF) continued on Friday, February 12, at the Palm Beach International Equestrian Center (PBIEC) in Wellington, FL, with a winning ride in the Grand Prix CDI-W for Brittany Fraser-Beaulieu (CAN) and All In.

Coming into the Global International Arena as the final combination of the day, Fraser-Beaulieu and the 2005 KWPN gelding by Tango, owned by Brittany Fraser and Marc-Andre Beaulieu, climbed to the top of the leaderboard with a final percentage of 73.696.

"Our Best Grand Prix to Date"

“I feel really relieved that we had such a good test today,” began Fraser-Beaulieu. “To be honest, I think this was probably our best Grand Prix to date. He was really on the aids and totally focused. Last year I started cutting my warmup to 15 minutes because he’s so big. I take him out and stretch him in the morning and then have a very short warmup. It’s working for us so far, and today he stayed totally with me through the whole ride. It was really incredible.”

Fraser-Beaulieu and the gelding earned their highest Grand Prix CDI-W score ever today, after competing for the first time in over 10 months at GDF 3. “I was a little nervous getting back into the ring,” she admitted. “I had such an amazing finish to last season, and I had almost 10 months of no showing, I was praying I was going to come out strong, but you never know! All In and I have such a long partnership and I know him so well. I’ve had him since he was five. We’ve shown everywhere, so as long as I know he’s feeling well, and I ride well, I know we’ll have a good test. I just had to get my confidence back and get the nerves out, and then I was able to ride more confidently today.”

After their performance today, Fraser-Beaulieu has decided to set her sights on the FEI World Cup™ Finals, but will play the rest of the winter competition by ear, depending on All In.

“I just decided that I’m going to try for World Cup™ Finals,” she stated. “Things are a little up in the air still with the rest of the season. I’d like to do the five star, to get another [Grand Prix] Special under our belt for the Olympics. We are just going to take it show by show and see how All In feels. If he needs to go we’ll go, if he feels tired we will take a break. I’m pretty flexible. We are fortunate to have so many shows here, so we’ll take it as it comes.”

Fraser-Beaulieu’s longtime coach, Ashley Holzer (USA), claimed second place in the Grand Prix CDI-W with Valentine, her own 2010 Hanoverian mare by Sir Donnerhall, receiving a 71.826%. Canada rounded out third place with a bookend ride from Chris Von Martels and Eclips, Barbara Soederhuizen and Chris Von Martels’ 2009 KWPN gelding by Apache, riding to a 70.326%.

In the Intermediare I 3*, Cesar Parra (USA) and Mr. Bumblebee claimed top honors for the day. Parra and the 2008 Danish Warmblood gelding by Sting, owned by Equiventure LLC and John and Karen Blank, earned a 71.853% for their efforts. Second place went to Kevin Kohmann (GER) and Equitas LLC’s 2010 KWPN stallion by Amazing Star, Five Star, with 71.529%. The USA’s Anna Marek took third aboard Felissirana, Alise Carrico’s 2010 KWPN mare by Belissimo M, with a 71.265%.