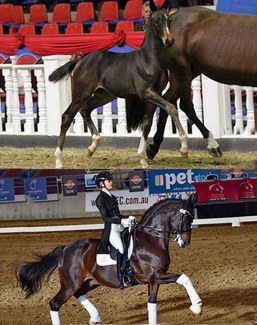 Total Recall made headlines by being the most expensive foal ever sold at auction in Germany in 2012. The dark bay gelding is now back in the spotlight as a winning small tour horse in Australia.

Total Recall is a 2012 born Oldenburg gelding by Totilas out of Weihevoll (by Sandro Hit x Figaro). He is bred by J. Hartmann.

From the first steps he took in his life, Total Recall attracted the spotlight.

Coming from the first crop of foals Totilas produced in Germany in 2012, the hype was further fuelled when Totilas' owners Paul Schockemöhle and Ann-Kathrin Linsenhoff purchased Total Recall as a foal at the 2012 Oldenburg October Elite Auction for a record price of 200,000 euro.

Linsenhoff ended up being listed as sole owner of the horse.

Although originally considered a stallion prospect, Total Recall did not get licensed but was focused on sport instead.

He was first competed as a 3-year old by Ann Christin Wienkamp in Altenberge. A year later Carolin Brandt presented him in Kreuth.

Linsenhoff's stepson, Matthias Rath, made his show debut on the dark bay when the horse was 5 in 2017. He finished third in the Bundeschampionate qualifier in Neu-Anspach.

In 2018 Brazilian Viktoria Riskalla competed him in the 6-year old classes at the CDI Leudelange, before Rath got back on in 2019 for the 7-year old tests at the CDI's in Ornago and Wiesbaden. The pair's last show was Heroldsberg in June 2019

In the autumn of 2019 Total Recall sold to Australian Under 25 rider Jemma Heran, who had been campaigning Hedelunds Mefisto that year.

"In October 2019 good friend Maree Tomkinson called and said there is an amazing horse I should buy," Heran told Eurodressage. "She sent through a video and we fell in love with him. At the time we weren’t looking to buy, and I had university exams and was unable to fly over. So we bought him off the video."

The horse arrived in Australia in December 2019.

"He came from a cold German winter to a hot Australian summer," Heran explained. "Total Recall landed in Australia fat and in a great condition he travelled better than other horses I have imported and adapted very quickly to Australian life and the heat."

The 24-year old Heran, who is studying Law at Bonds University, had plenty of time to get to know her new ride with Covid-19 shutting down all competition in Australia.

"Covid hit not long after his arrival which meant a lock down no shows for the most of 2020," she said. "We trained at home for the most of 2020 He is very smart and talented and is now training all the Grand Prix at home and shows talent for all the movements."

In October 2020 they made their show debut at national small tour level. He scored just above 70%.

"At this (first) show he was very green and spooky and we had many mistakes in our tests," Jemma added.

With all CDI's cancelled in Australia for 2021 due to corona, national premier league shows are keeping Australian riders on point. Equestrian Willinga Park in Bawley Point hosted two consecutive, national shows and attracted a large field of competitors who were eager to get some mileage in the show ring.

"We were very lucky to have two competitions back to back at Willinga park," said Jemma. "This aided in growth and comfort in the competition arena and with a larger atmosphere. Total Recalls temperament is second to none. He has an amazing attitude, is very confident and always elastic."

Jemma is aiming for the highest level and hopes to ride Grand Prix with Total Recall by next year.

"So long as covid doesn’t hinder our ability to continue to compete and gain experience together in the show ring, we will hopefully move onto the Grand Prix next year," she concluded.