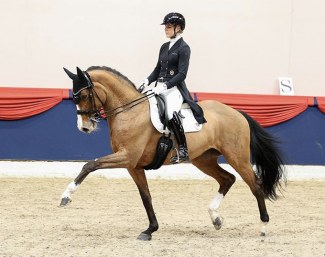 Belle de Carpie is a 12-year old Holsteiner mare by De Chirico out of U-Carpie (by Carpaccio x Grundyman xx). She is bred by Markus Jurgens.

The mare was first competed by Kim Laura Jürgens in an A-level test in August 2014.

In 2017 Brenske's girlfriend Nathalie Westphal competed the bright bay mare, first at M-level and then through the small tour until the spring of 2018.

Later on in 2018 professional Grand Prix rider Juliane Brunkhorst welcomed Belle de Carpie in her barn and developed the mare to the highest level.

In March 2019 they made their show debut in an Inter II at the CDN Hamburg and placed third. They showed in the Louisdor cup qualifier in Hagen and Werder. Their next start was more than a year later in Elmshorn in June 2020,  followed by starts in Zeven and Elmshorn in June-July 2020.

The latter was their last show together.

In 2020 Brenske reorganized his horse stock at the same time as Brunkhorst had to find a new barn after the owner of her old base in Hamburg closed his stable due to health reasons.

"I had to find a new home for my horses and because it wasn‘t that easy, the owner of Carpie picked up the horses," Juliane told Eurodressage. "The great opportunity arose for me in the stable "AH Abbendorf" of Finnish Sara Aarnio and my trainer Jonny Hilberath, where I’m home now with my horses and work independently."

At that time Brenske sold the number one Devanto, which Brunkhorst competed at international Grand prix level, to Swedish Olympian Tinne Vilhelmson. He reassigned Belle de Carpie to a new rider, Marcus Hermes, who had been based at Gut Hausking, the yard rented by Brenske's ex-wife Valerie von Hohenzollern, since November 2020.

Hermes trained Belle only for a few months.  Six weeks ago, the mare was sent back to Brunkhorst.

"When the owner of Carpie asked me if I want to train her again, i didn‘t have to think twice," said a thrilled Juliane, who jumped at the occasion to get the talented mare back.

Brunkhorst and Belle de Carpie immediately connected again and the pair did its first show of 2021 in Vechta last weekend.

At the big national indoor competition at the Oldenburg Horse Center, the pair placed second in the Intermediaire II with 73.860%, behind Annabel Frenzen on SilberStern (74.079%).

"I'm very happy that we are a team again," said Brunkhorst.