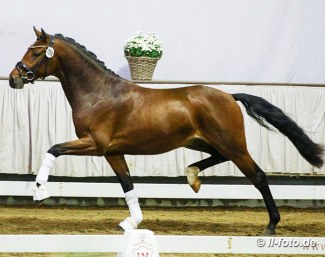 Not only Darling's Dream, but also the Warendorf state stud owned Ferrari Superfast has tested positive to caffeine at the 2020 Westfalian Stallion Licensing last November.

Not the Westfalian breed society itself, but Helgstrand Dressage made the positive medication test public on 2 March 2021.

Helgstrand, who bought Darling's Dream for 600,000 euro at the auction, wanted to clarify to the breeders why the reserve champion of the 2020 licensing will not be standing at stud. The Danish horse dealer wants to annul the sale due to doping and the Westfalian society and previous owner have refused to take the horse back.

This is the second year in a row that Helgstrand Dressage ended up with a doped horse at this licensing. In 2019 their licensing champion Dynamic Dream tested positive to the more severe NSAID Flunixin, which according to then owner Giesselmann was used for a "skin problem".

Helgstrand, who was rumoured to have bought the horse before the auction instead of for the 1.9 million euro auction price, decided to keep this stallion despite the positive test.

Late in the evening of 2 March, the Westfalian society followed up on the news with a short statement, revealing that "caffeine" was the prohibited substance found in Darling's Dream's blood, but that it was caused by feed contamination.

On 3 March, the society issued a longer statement, mentioning that in fact a second horse tested positive to the same substance,

The Westfalian society tested all 50 stallions at the licensing for doping. The results were first discussed with the owners in January. Yesterday evening they revealed that two horses were positive for the same drugs: caffeine and theophylline.

According to the FEI Clean Sport database, Theophylline is a prohibited substance and a Bronchodilator, used for the treatment of asthma and various respiratory diseases.

Just like caffeine, theophylline is also marked by the FEI as a "specified substance" which are more likely to have been ingested by Horses for a purpose other than the enhancement of sport performance, for example, through a contaminated food substance.

In 2020 the German horse racing world had a string of doping cases all with caffeine. They were sourced back to feed company Marstall. On 18 December 2020 the FEI posted the following statement:

Bernhard Kreiling GmbH, the manufacturer of Marstall, identified apple pomace, an ingredient in the feed, to be the source of contamination. Measures have been taken by Bernhard Kreiling GmbH to prevent further contamination with caffeine and other substances derived from caffeine. Feed produced since 14 July 2020 (...) should be unaffected. The FEI recommends that anyone using this feedstuff should carefully check the batch numbers and contact the manufacturers if they have any concerns.

The Westfalian society stated that, "the Rüscher-Konermann training stable was cooperative and very interested in clarifying the causes of the positive medication control right from the start. The B-samples, a feed analysis as well as blood samples from a control group (two other horses from their yard) provided clear evidence that the substances got into the horses via feed contamination. Since the positive results are a special case, the further procedure is significantly more complicated than one would initially assume. It makes a difference whether a stallion has been subjected to a conscious drug treatment initiated by the exhibitor or, as in the case at hand, due to feed contamination."

It was not confirmed if Marstall feed was given to both stallions or a different brand. Both horses were fed "the same commercially available mash."

The Westfalian society added that "Helgstrand ApS was interested in an out-of-court settlement with the Westphalian Horse Studbook and the exhibitor. However, no agreement could be reached in the past few weeks.

Because feed contamination is an "atypical finding" the Westfalian society has not revoked the breeding licence of Darling's Dream nor Ferrari Superfast. It discussed the matter with the NRW Ministry of Environment, Agriculture, Nature and Consumer Protection in Düsseldorf. The Ministry has not yet made a decision.

"It goes without saying that it is also in the interests of the Westfalian Studbook to deal with this "special case" and to clarify it as quickly as possible," their press release stated. "Nevertheless, a qualitative clarification requires a certain time frame."